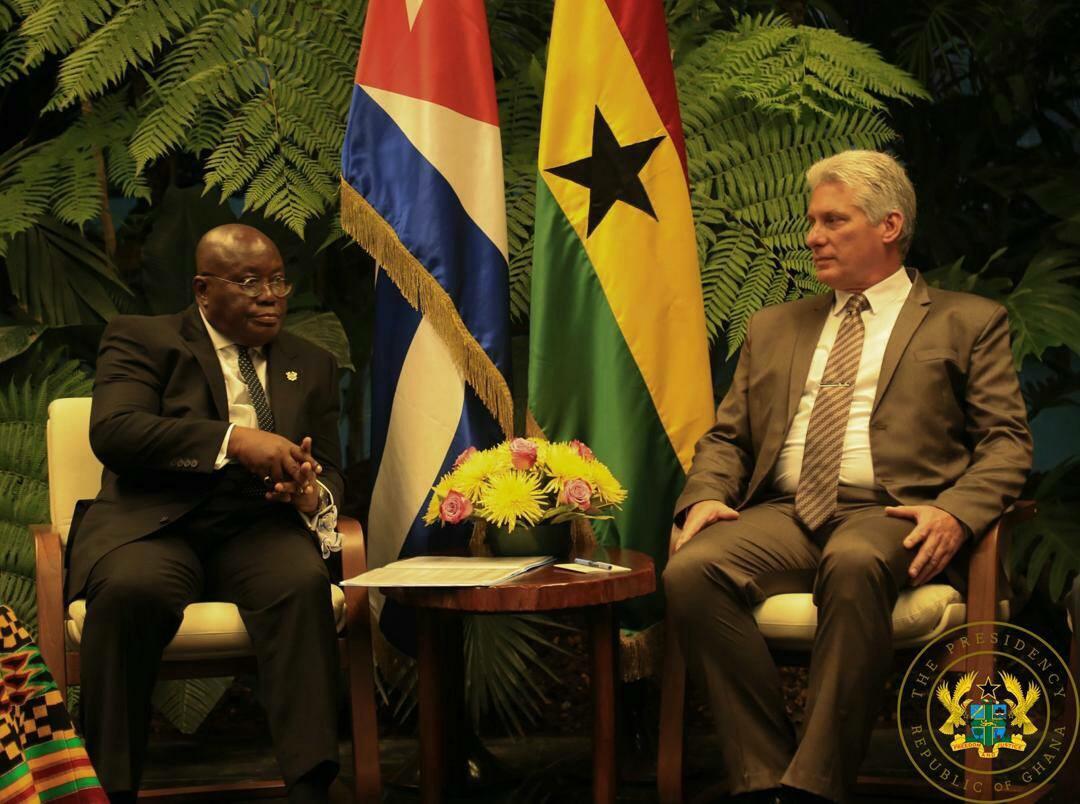 The President of the Republic, Nana Addo Dankwa Akufo-Addo, says the prospects for scaling-up economic relations between Ghana and Cuba are considerable, and is calling for the two countries to continually search for ways to co-operate.

According to President Akufo-Addo, “I have no doubt, that, together, we can forge a new, strong partnership for co-operation between our two nations for the mutual benefit of our two peoples”.

The President made this known on Thursday, 4th April, 2019, when he held bilateral discussions with the President of Cuba, His Excellency Miguel Diaz-Canel, as part of his official visit to that country.

In his remarks, he noted that his visit to Cuba is “to continue the process of developing stronger ties between our two countries, as well as exploring new areas of co-operation to the mutual benefits of our two peoples.”

At the diplomatic level, Ghana and Cuba have maintained relations since 1959. Indeed, Ghana was the first African country to establish diplomatic relations with the Government of the Cuban Revolution. Since then, officials of the two countries have exchanged high level visits.

Ghana, President Akufo-Addo stated, is grateful to Cuba, through the Cuban Medical Brigade of some two hundred and twenty-seven (227) medical doctors, for the medically-related services they are providing the people of Ghana.

“Six hundred (600) Ghanaian students have been given scholarships by the Cuban government since the year 2000, with some three thousand (3,000) Ghanaians benefiting from this arrangement in previous years. I am glad to note that, during this visit, new arrangements have been concluded to cover two hundred (200) more Ghanaian students to study medicine here,” he said.

The President continued, “The co-operation between our two countries is being extended to the eradication of malaria, and soon, through a joint venture agreement with Labiofam S.A., a bio-larvicide factory will be established in Savelugu, in the Northern Region of Ghana.”

An agreement, he added, is also being reached for the sale of Ghana’s cocoa liquor to the Stella S.A. chocolate factory in Cuba, stressing that “we want to examine the possibility of Stella S.A. establishing a manufacturing facility in Ghana.”

Paying tribute to the leader of the Cuban Revolution, the late Fidel Castro, President Akufo-Addo noted that it was during the time of the late Cuban leader that Cuba emerged as a reliable friend of Africa.

As Ghana’s Minister for Foreign Affairs, the President stated that he had the honour of meeting Fidel Castro in April 2006, when he led Ghana’s delegation to the Ghana-Cuba Permanent Joint Commission for Co-operation, which was held in Havana.

“In that meeting, he made a prediction about an aspect of my life, which has since come to pass. I lost track of time in the meeting with him, and soon realised that I was going to miss my flight,” he said.

The President continued, “Then, in his still, calm but assured voice, Fidel Castro said to me, words I remember to this date, and I quote, ‘Don’t worry. Even if you miss your flight, there is another at a later time today. Don’t be in a hurry to leave because I might not have the opportunity to meet you again. One thing I can tell you is that you will be President of your country one day’”.

President Akufo-Addo further indicated that “It took me ten years to see that prediction realised, and I am sad I could not have the opportunity to come back and tell him, ‘Commandante, your prediction has come to pass.’ May the soul of Fidel Castro rest in peace.”