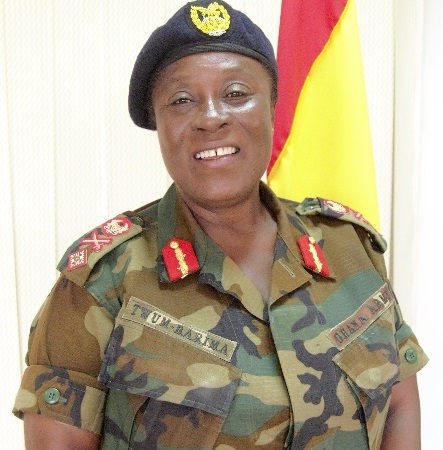 For the second time, the Ghana Armed Forces has had a female Brigadier General in the person of Felicia Twum-Barima.

Having served in the army for 29 years, Brigadier General Felicia Twum-Barima was promoted by President Akufo-Addo on recommendations of the Armed Forces Council.

Brigadier General Felicia Twum-Barima has had a successful career in the Ghana Armed Forces. She occupied 22 positions both in Ghana and abroad. She has also occupied six positions in UN Peacekeeping Missions.

As the former Director of Education at General Headquarters, she will assume her new office of Defense Attaché at the Ghana Embassy in Abidjan, Cote D’Ivoire.

Brigadier General Twum Barimah has affirmed her readiness to work in her new office with determination and optimism.

She is among the first females to be deployed as a Military Observer (MILOB) in a UN Mission in the Democratic Republic of Congo.