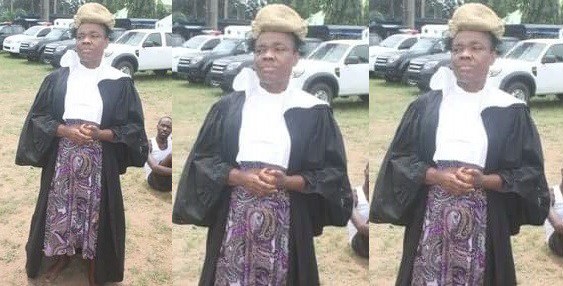 A fake lawyer identified as Beatrice Nnamuoh who has been practicing the profession without a license and won several high profiled cases for five years has been arrested by the Lagos State Police.

According to the source, Beatrice confirmed that indeed she has no law background because she offered sociology at the tertiary level but has worked with several lawyers and in the process learned from them.

“I studied sociology but I have worked with many lawyers. It was in the process that I learnt many things about law. Aside, I am very intelligent. I do everything that comes my way very well. “I love the law profession. I sought admission four times but couldn’t get in because of lack of money. To help myself, I decided to go into it illegally. I have been doing it and succeeding in many cases I handled better than real lawyers.” She said she regretted her actions and pleaded for mercy.

Nnamuoh hails from Iyiawu village in Onitsha, Anambra state in Nigeria and took advantage of her association with lawyers to learn some few technical terms that aided her in her new found job.

It would be recalled that sometime last year another fake “Barrister”, Chris Elisha, who had been practicing as a lawyer for the past fifteen years without being spotted was also arrested by the Lagos State Police Command.

Nemesis caught up with him at a Magistrate court where he appeared on behalf of an accused person but found it difficult to move a motion for the variation of the bail condition of his client.

His predicament did not go unnoticed by one Barrister Nnamdi Samuel Nwafor who challenged his qualification. According to Bar, Nnamdi Nwafor, a newly qualified lawyer that is yet to cut his teeth at the bar would have been able to move a motion without issues.