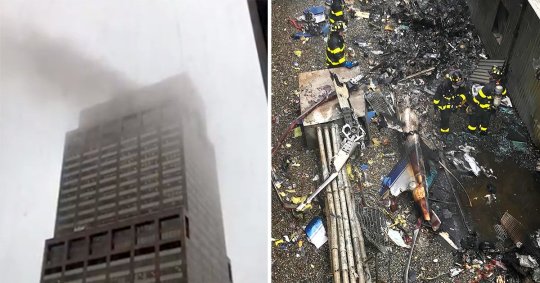 One person is reported to have been killed after a helicopter crashed onto the roof of a Manhattan skyscraper. ABC7 said there had been a single fatality as a result of Monday afternoon’s ‘hard landing’ on the roof of 787 Seventh Avenue, a 54-story office tower in Midtown.

The New York Fire Department has since said the helicopter’s pilot was the person killed. They are believed to be the only person on board at the time of the crash. The Federal Aviation Administration (FAA) say the crash is believed to be an accident, and that there is no indication it was a terror attack.

No one inside the building is believed to have been injured. Eyewitness Wendy Slater shot footage believed to be the same helicopter flying erratically shortly before the crash. It was seen nosediving towards the Hudson River, before disappearing into the clouds and crashing.

President Trump – whose Trump Tower skyscraper sits close to the affected building has also been briefed. The tower, called the Axa Equitable Center, is home to the Axa insurance group, as well as other corporations including French bank BNP Parabis and UBS. A New York Police Department spokesman tweeted: ‘There was a helicopter hard landing on the roof of 787 7th Avenue in Midtown Manhattan. ‘Fire has been extinguished. Please continue to avoid the area.’ New York Governor Andrew Cuomo said New Yorkers were understandably spooked by the accident after the 9/11 terror attacks saw two airliners deliberately flown into the World Trade Center’s former Twin Towers.

Police are now searching through the wreckage, which has sent aviation fuel pouring off the roof and onto 51st Street.

It advised locals to avoid the area, which is already subject to enhanced security procedures because of its proximity to Trump Tower.

Donald Trump’s Fifth Avenue skyscaper has seen a cordon thrown up around it and a no-fly zone imposed overhead since he was elected President of the United States in November 2016. The tower whose roof the chopper crashed onto has been evacuated while police continue to investigate the smash.