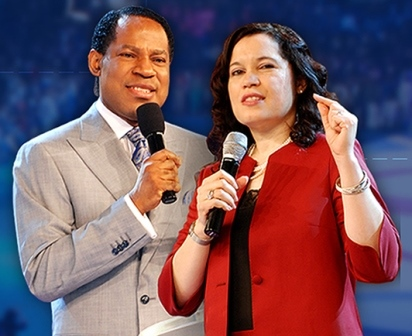 In a recent blog post, Anita shared a conversation between herself and her ex-husband, Pastor Oyakhilome, and many are sharing their sympathies.

It is no longer news that all is not well between founder of Believers’ Loveworld Ministries, Pastor Chris Oyakhilome, and his wife, Anita, who have gone their separate ways and called their marriage quits for a long time now.

However, it was not clear to most people as their Rhapsody of Realities, a devotional daily, had photos of both of them in each cover and wordings supposedly preached by them to their congregation. It became clear that they were no longer man and wife when the absence of Anita at her daughter’s wedding in their church raised questions. Legit.ng reported how the ceremony was a lovely affair that had a lot of dignitaries in attendance, including Pastor Benny Hinn, who officiated the ceremony. However, there was a noticeable void at the event. The mother of the bride, Anita Oyakhilome, was visibly absent at the wedding.

While many are now catching on that the couple are no longer together, not much has been said about both parties until recently. In a blog post, Pastor Anita shared an eye-opening conversation between herself and her former husband and from it, many can deduce that their problems started a long time ago and it appears nonredeemable.

Happy Anniversary to the best couple in the world

Wife: Hello Husband: How are you?

Wife: I noticed many greetings on social media wishing us a happy anniversary. I find it confusing to read comments from your close friends saying “ best couple in the world”; it sounds like a complete joke, when they know we rarely see each other. We see each other at most ten days in a year; I can’t understand their reason for making this comment, such flattery. It is confusing to me.

Husband: Well, at least they sent their greetings.

Wife: Their greetings are on social media, no contact by text or by email.

Wife: Hello Husband: Yes Wife: I sometimes wonder if we are married. There is nothing more to this relationship to indicate we are married apart from a ring on my finger; the ring is another story, and our pictures are interjected because we are rarely together to take a proper picture. I feel sad that we are not together.

Husband: Look, I have told you over and over again that we cannot live in the same country because we are very busy andone country is too small for both of us. I expect you should be able to figure that out.

Wife: One country is too small for us?

Husband: Yes and you keep coming back to ask the same question.

Wife: Okay. Since you don’t often call either, please call the children, at least once a month. They go on for months without speaking with you. I noticed they don’t seem to care anymore.

Husband: Okay Wife: That is about all. Husband: Silence (breathing sound)

Wife: Have a beautiful day.

Wife: Okay Facing the reality of a dead marriage, where a spouse spends many years of endless hope in anticipation for a change, enduring a relationship that is bereft of life. Believe it or not, this was somebody’s experience and is another person’s state of affair.