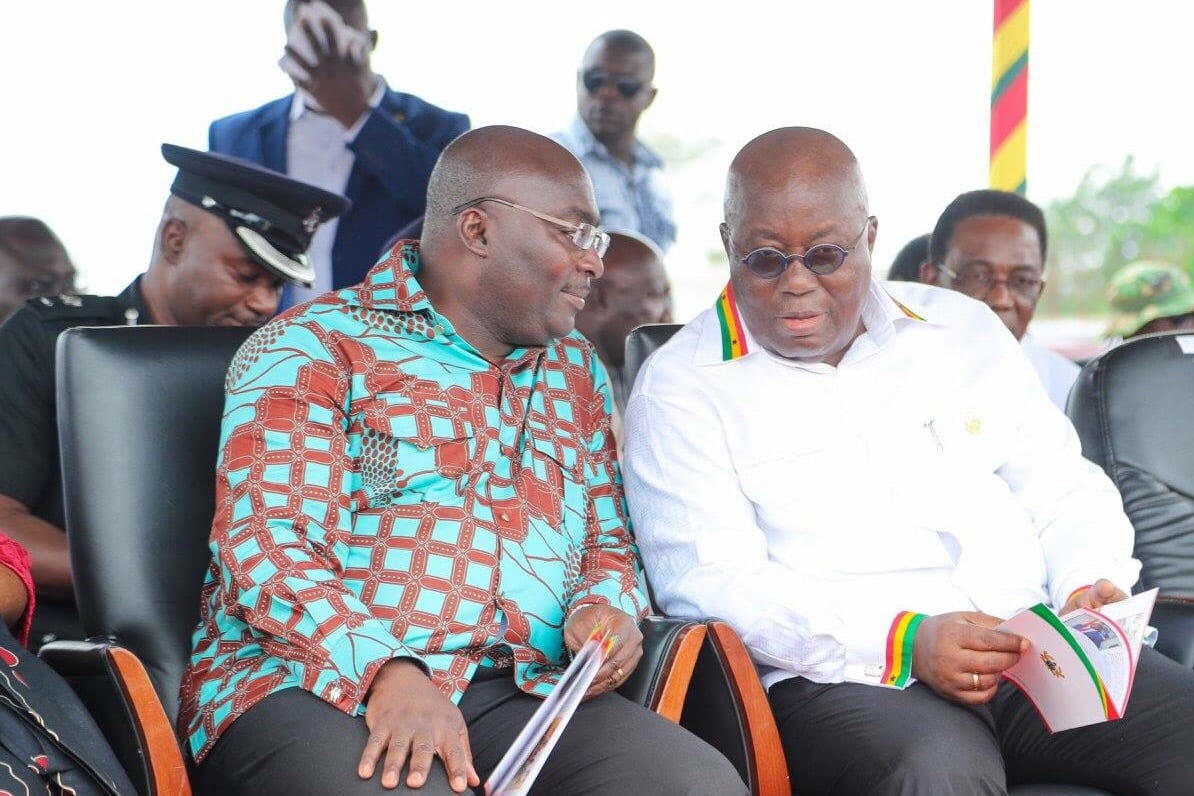 The Vice President of the Republic, Alhaji Dr Mahamudu Bawumia, has described the infrastructure record of the Akufo-Addo administration as “second to none, with verifiable data to back up my claim”, when compared to any government in its first term of office under the Fourth Republic.

“Notwithstanding the impact of the COVID-19 pandemic on the completion times of some projects, the data indicates that in the fourth republic, no government has achieved as much in its first term of office in terms of infrastructure projects it initiated its first term as the NPP government of Nana Addo Dankwa Akufo-Addo.”

Using a combination of film, tables and data, Dr Bawumia disclosed that over the past 3 and half years, the Akufo-Addo administration has implemented different infrastructure programmes across various sectors in line with the government’s agenda to ensure inclusive and accelerated economic development. The focus, he said, has been to provide infrastructure for all.

“This is consistent with our strategic orientation to ensure the development of broad base, wide scale infrastructure, taking place in every district across the country instead of a few big infrastructure projects in a few cities.”

Zeroing in on sectoral performance, the Vice President revealed that a total of 1927 road projects have been undertaken across the country since 2017. Out of that, 1307 of them are completed while 620 are currently under construction.

“Government has selected three critical roads in every region. Work is ongoing on all these critical roads and are at various stages of completion, including the famous Eastern Corridor road, for example Jasikan-Dodo-Pepesu road, Bolga-Bawku (80% complete) and Lawra-Hamile (complete).

“Four state of the art interchanges are also under construction: The Tema Interchange, where the loan, sod cutting and completion were executed by this government; Tamale interchange under the Sinohydro Programme, the first ever interchange in the Northern Sector of the country (44% complete and expected to be completed by the middle of 2021); Pokuase interchange (the first four tier interchange in West Africa – 75% complete.

“The, loan agreement for this (Pokuase interchange) project was signed in November 2016 for a three-tier interchange. We subsequently renegotiated for a four-tier interchange without any increase in cost.

“The Obetsebi Lamptey interchange is 55% complete.  As well, the Sod has just been cut for the Nungua Interchange

“This is the highest number of interchanges (5) being constructed in the first term of any government since independence. A sixth interchange, the PTC interchange in Takoradi (the first interchange in the Western Region) will start in early September.”

“It is important to note that the cost of the Tema, Pokuase, Tamale, and Obetsebi Lamptey interchanges total $289 million while the Kwame Nkrumah interchange was constructed at a cost of $270 million” Dr Bawumia disclosed.

Turning to Agriculture, Dr Bawumia said Government has embarked on the construction of 80 warehouses throughout the country, each with a capacity of 1,000 MT, under the One District One Warehouse Initiative as part of measures to ensure food security, reduce post-harvest loses, guarantee farmer incomes and improve marketing.

Government has also established three Greenhouse Training Centres with commercial components, each on a five-hectare piece of land, at Dawhenya, Akumadan, and Bawjiase. 100 Greenhouses have so far been built, with hundreds of graduates trained in greenhouse vegetable production.

“The NPP government is implementing a holistic plan to provide farmers and households access to water for all year-round farming. Under the plan, there are three components of infrastructure: Small Earth Dams (aka 1 Village 1 Dam), the Pwalugu Multipurpose Dam and Irrigation Project, and various irrigation systems, including Tamne Phases I & II, Mprumem Phases I & II, rehabilitation and expansion of existing schemes at Tono, Kpong Irrigation Schemes (KIS), and Kpong Left Bank Irrigation Project (KLBIP).

“The completion of the Small Earth Dams project (372 completed, 64 ongoing) will deliver the largest stock of small earth dams ever constructed in the country. The amount of irrigable land the 1V1D policy provides is over 12,000 hectares which is almost equal to the total public irrigable land currently available in Ghana.”

Vice President Bawumia indicated that since coming to office in 2017, the NPP government has embarked on numerous infrastructure development in the health sector, including:

(i)         Contracts for the construction of 429 CHPS compounds in rural communities. 243 are completed and commissioned for use, 186 are at various stages of completion.

(ii)        Of the 55 maternity blocks and wards being constructed at different health facilities across the country, 36 have been completed and 19 are at various stages of completion. Some of the completed projects are in communities including Aduman in the Afiagya Kwabre district, Frimponso in the Atiwa district, Bawku Central, Aveyime in the North Tong district, Danladi in the Nkwanta North, and many more.

“In collaboration with the private sector, we have delivered the first ever Infectious Disease Centre in Ghana. This was constructed within 100 days and has since been commissioned for use.

“To improve delivery of essential services at deprived and remote communities across the country, in collaboration with Zipline, we have constructed the four drone centres at Omaneko in the Eastern region, Walewale in the North east Region, Mampong in the Ashanti Region and Sefwi Wiaso in the Western North region. As at the end of June 2020, 79800 medical products have been delivered to 945 health facilities. In addition, it has delivered over 2500 Covid samples to testing centres in Accra (Noguchi) Kumasi (KCCR),” Dr Bawumia disclosed.

As well, 307 well-equipped state of the art ambulances have been procured and managed by the National Ambulance Service, with each constituency being allocated at least one ambulance.

“Over 5,498 communities have been declared Open Defecation Free. Even more interesting is the fact that no cholera cases have been recorded thus far,” he added.

To spur economic growth, hundreds of modern markets have also been constructed, while a total of 183 companies, 61 of which are existing companies while 122 are new, are benefitting from the One District One Factory initiative.

“There have also been various infrastructure support for industrial parks and special economic zones across the country including Dawa, Apolonia, Tema Free Zones enclave among others.

Citing numerous examples in digital infrastructure, Energy, Education, Security, Railways, Sports, Housing, Sea Defence and Airports, Vice President Bawumia his party’s opponents “to show us what they accomplished by way of infrastructure initiated in their first term in office. This is because virtually all the key projects they like to point to were completed in their second term of office.

“Also, contrary to the propaganda, the evidence is that we have also completed or working to complete many projects that our government inherited.

“I will like to note that we are not just building infrastructure, we are building a nation. We are building all this infrastructure while staying committed to our social contract to providing free senior high school education, creating jobs, transforming agriculture, industrializing the economy, sustaining the national health insurance scheme, digitizing the economy, ensuring the public safety of Ghanaians, and keeping the lights on. We still have much more to do.

“The future is bright if we stay the course. That is why we are asking the good people of Ghana to give Nana Akufo-Addo and the NPP “four more to do more for you”.

Ahead of Vice President Dr. Mahamudu Bawumia’s infrastructure presentation this evening, scores of Ghanaians have taken to social media to commend the Nana Akufo-Addo government for its infrastructure delivery in three and half years in its first term of office.

In some instances, excited locals shared selfie pictures of themselves at project sites, and also accompanied their pictures with gratifying words to the government.

Their commendations come way ahead of this evening’s government’s infrastructure presentation to the nation by Vice President Bawumia.

The Vice President is expected to speak extensively on the massive infrastructure investment made by the government of President Akufo-Addo since assuming office in 2017.

Infrastructure projects in key sectors such as education, health, roads, railways, water and sanitation, sports and energy are expected to feature prominently in Dr. Bawumia’s presentation.

The Vice President, supported by sector ministers, will give a breakdown of projects in each sector with complete data, pictorial evidence and locations of the projects through a digital database for independent verification.

The presentation, which was done yesterday Tuesday August 18, was live on all major media networks across the country.