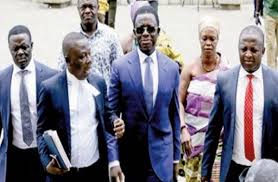 The defence in the ongoing trial of Dr Stephen Kwabena Opuni, a former Chief Executive of COCOBOD, and Mr Seidu Agongo, the CEO of Agricult Ghana Limited, yesterday suffered yet another major blow when the high court rejected a motion for stay of proceedings filed by Mr Benson Nutsukpui, the lawyer for Mr Seidu Agongo.

The court said the defence failed to sufficiently provide good reasons for which the motion should be granted.

It added that granting the motion would, as well, cause the case to be unnecessarily delayed.

Benson Nutsukpui filed the motion for stay of proceedings after earlier filing an interlocutory appeal against a ruling by the judge on February 25, 2019.

By filing a motion for stay of proceedings, Mr Agongo’s lawyer was asking the judge of the high court presiding over the substantial case to pause the trial until a ruling is made by the appellate court on the interlocutory appeal he had filed.

In his submission yesterday, Mr Nutsukpui said there were four reasons why the high court, presided over by Justice Clemence Honyenugah, should grant the motion.

The first was that the ruling on February 25, 2019 deprived his client the right to confront the prosecution’s witness.

He added that the court had also violated a binding decision of a higher court.

Furthermore, Mr Nutsukpui thought that that day’s ruling closed the door to his client’s right to make a submission of no case, and, finally, that the ruling offends the evidence act and procedures of the court. He believed these constituted a miscarriage of justice and a violation of Mr Agongo’s constitutional rights.

The prosecution, led by Stella Ohene, a senior state attorney, argued in opposition to the motion.

She said the ruling of February 25, 2019 was proper and based on law, for which reason the prosecution was confident that the interlocutory appeal will not succeed.

She pointed out that the defence’s claim that the ruling closed the door to a submission of no case was premature and not founded in law or procedure.

According to her, the trial involves more than Mr Agongo, saying if proceedings is stayed, it was going to affect the other accused person – Dr Stephen Kwabena Opuni, who hadn’t filed an appeal or stay.

She added that there was no risk arguing that the applicant of the motion, Mr Agongo, would suffer injury if the substantive case proceeded while the interlocutory appeal is heard.

Justice Clemence Honyenugah, the presiding judge, after hearing both sides, issued a ruling which rejected the motion for stay of proceedings.

He said he never had the impression that his ruling would deny anyone’s rights or be characterised as a miscarriage of justice.

He stated that the defence had failed to establish enough grounds for the motion to be granted.

In his view, granting the motion will cause unnecessary delay. The motion is, therefore, denied, the justice said.

On February 25, 2019, which is the day referenced in the interlocutory appeal, the court rejected an attempt by the defence to tender into evidence the report written by the committee setup by the Cocoa Research Institute of Ghana (CRIG) to investigate a missing document which the defence said was germane to their case.

Mr Nutsukpui asked to tender the committee’s final report into evidence through Dr Alfred Arthur, who is the acting Head of the Soil Science Division at CRIG and a witness for the prosecution.

The prosecution objected to the tendering, arguing that the defence had failed to establish enough foundation to tender the report into evidence.

The judge, in his ruling, agreed with and upheld the objection raised by the prosecution, thereby rejecting that the report which the defence sought to tender into evidence. He said admitting the report into evidence would have been unfair.

What the defence should have done, he advised, was to tender the report into evidence through one of the three members of the committee so that the prosecution will have a fair opportunity to cross-examine that committee member.