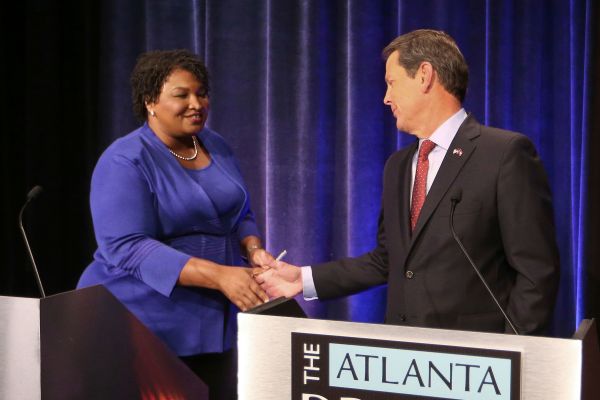 What do Oprah Winfrey and Will Ferrell have in common?

Last week, each took to the streets in Georgia to campaign for Stacey Abrams. Abrams, 44, is running as a Democrat for governor of Georgia against Republican Brian Kemp, currently Georgia’s secretary of State. If Abrams wins, she will become the first black female governor in the U.S.

“No, I am not like what has preceded me. I look very different,” Abrams told Brooke Baldwin earlier this year in an interview for CNN’s “American Woman in Politics.” “But that difference is about my experiences and my sympathy and my empathy for the communities who need a voice.”

Abrams, who is one of six children, grew up in Gulfport, Mississippi, and later moved to Georgia with her family. She tells Baldwin of a time when she was invited to the governor’s mansion as valedictorian of her high school class, but was denied access when she got there.

“We arrived at the governor’s mansion on public transit because my parents couldn’t afford to get us there any other way,” Abrams says. “This guard saw me, saw my parents, saw the bus and told us we didn’t belong there.”

Abrams says the incident has stuck with her. “I don’t want to run for governor because of [that guard]. But, I know what it feels like to be told you’re not enough, to be told you don’t belong, and the role that the governor can play in Georgia and in America is to make certain every person believes they belong.”

Abrams’ career in politics started in 1992, when she attended a televised town hall meeting with Atlanta’s first black mayor, Maynard Jackson, according to The New York Times. The town hall was held after the acquittal of Los Angeles police officers who were caught on camera beating a local black man named Rodney King. Abrams kept in touch with Jackson and was later offered a job in the city’s youth services office.

After graduating from historically black liberal arts college Spelman, Abrams went on to earn degrees from the University of Texas and Yale Law School. By the age of 29, she was serving as deputy city attorney of Atlanta.

As the founder of the voter education group The New Georgia Project, Abrams also helped to get more than 200,000 people of color registered to vote between 2014 and 2016.

Aside from her political work, Abrams is also an award-winning author of romantic suspense novels. She writes under the pen name “Selena Montgomery,” and her eight books have sold more than 100,000 copies.

Since releasing her personal financial information earlier this year, Abrams has faced scrutiny regarding financial missteps and debt. In a column for Fortune, she reflected on owing the IRS over $50,000 in deferred taxes and owing more than $170,000 in credit card and student loan debt.

“I am in debt, but I am not alone,” wrote Abrams. “Debt is a millstone that weighs down more than three-quarters of Americans. It can determine whether we are able to run for office, to launch a business, to quit a job we hate. But it should not — and cannot — be a disqualification for ambition.”

As the breadwinner of her family, Abrams says she is responsible for taking care of her parents, grandmother and niece. She told Baldwin that her experiences have shown her how important it is for Georgia residents to “have a leader who can make the choices to make sure everything is taken care of.”

She also believes that poverty is immoral. “I think it is economically inefficient and I think it’s solvable. And I think no matter what space you stand in to tackle those challenges, the opportunity to make things better is always there.”

At a recent rally in Macon, Georgia, she spoke about the role her identity plays in making her uniquely qualified to serve as the state’s next governor. In Georgia, 21 percent of black and Latina women live in poverty, compared to 11 percent of white women.