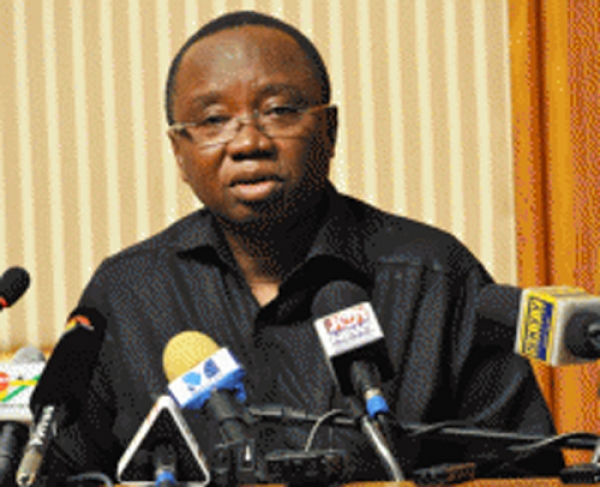 I write to you in my capacity as a former Minister of National Security, as a son of the land, and as a father in the hope that you might exercise the moral authority of your Office to pull this nation back from the precipice on which it now stands. The scenes we witnessed during the by-election at Ayawaso West Wuogon were utterly disgraceful and well-deserving of the condemnation of all true patriots of this nation. More importantly, those events were but another expression of a pervasive lawlessness, impunity and disregard for due process that our democracy certainly cannot survive if left unchecked. Nothing less than the very stability of this nation is at stake, for the next step from this point takes us over the edge and into the abyss.

Your Excellency, I held the National Security portfolio during the presidential election of 2000, and oversaw the first democratic transition of political power since Ghana attained her independence some four decades prior. The result of that election did not favor my party nor my esteemed candidate, and the lost opportunity to further the work we had began was a disappointment. Yet I was privileged to have played a critical role in affirming this nation’s commitment to the high ideals of freedom and justice, and to the path of peace and democracy. Many of the details of that momentous period remain in the confidences of those of us most intimately involved, including your good self. You know well that sound counsel prevailed over petty partisanship, and that ego was subjugated to the interests and wisdom of the Ghanaian people. ​ I​ respectfully pray you to be mindful of this, for the uncertainty of the present hour demands no less.

Your Excellency, I have taken the time to apprise myself of public details of the unsavory events that marred the by-election, and have brought to bear my little national security experience in assessing them and their implications without prejudice or presumption. This is why I deem it imperative that Ghanaians have an honest, fact-based conversation about the events of last

Thursday. They were ominous portents of the coming election in 2020, and of the inevitability of bloodshed if we persist in this course. Our continent is replete with countries that have degenerated into civil war for less. We must set aside our partisan colourings that we might learn from what happened and commit ourselves to the avoidance of any future repetition for the sake of posterity.

The unsettled scores of yesterday’s men must not condemn the hopes of tomorrow’s and of their generations.

I have been scandalized by the suggestion that the armed, masked men who set upon innocent Ghanaians are agents of our national security apparatus. High ranking appointees of your administration have severally made this claim, and premised their justifications of the ghastly brutality on the same. It is worth noting, too, that other government officials have insisted that the brigands were hired hands of the National Democratic Congress who were engaged to orchestrate chaos in order to rationalize my party’s withdrawal from the by-election. These explanations, by their very nature, are mutually exclusive, suggesting that at least one of them is a patent falsehood.

The latter claim, which was put forward by the national leadership of your party, was directly contradicted on the Saturday following the incident by your own Minister of National Security. Hon. Bryan Acheampong aligned with the former explanation, claimed the men as his own, and alleged that they were pursuing some alleged threat in the home of Mr. Delali Brempong, a career pharmacist and parliamentary candidate.

Mr. President, Ghanaians take great pride in the exemplary professionalism of the women and men of our national security apparatus. It is a product of their thorough training, remarkable discipline and personal integrity. They have stood in the breach for this nation on countless, unspoken occasions to preserve our peace and freedoms without recognition or praise. The suggestion that these marauders number in their ranks demeans the service and sacrifice of those true patriots who stand guard for their nation and for their countrymen.

The reckless use of live firepower against unarmed citizens; the attempt to enter a private residence without a warrant; the physical assault of a sitting Member of Parliament; the threats against election officials, party agents and independent observers; and the battery of uniformed service members who sought to intervene in these acts of intimidation – these are entirely inconsistent with the professional and operational guidelines of the national security apparatus known to me.

The plain truth is that these things did indeed happen and were well documented by journalists and by election observers. The ongoing attempt to gaslight the Ghanaian public will not wash, and it is also terribly shortsighted and myopic. Those of your counsellors who are making a public mockery of the intelligence of the Ghanaian people – delighting in the recent events and fostering thoughts of repetition – betray your good name and are traitors to your legacy. The indignation of your appointed Electoral Commissioner about the seriousness of the situation only serves to stoke the embers that we must hastily put out. The conceitedness of her response evidences an astonishing degree of political immaturity, and her attempt to discredit the observations and valid concerns of the independent observers is truly unfortunate, unconscionable and unwise.

The events at Ayawaso West Wuogon mark a notable escalation in the political thuggery that is fast becoming a staple of our politics, because they were perpetrated in the name of the State and with the implements of its defense. They establish a precedent that all but ensures a cycle of revenge and reprisal that will irreparably weaken the rule of law in this country, and, of greater concern, destroy the already frail public trust in some of our most critical national institutions. This, Your Excellency, is the ultimate threat to the security of any nation, especially in our part of the world.

Several civil society organisations including Occupy Ghana have urged you to establish a judicial commission of enquiry into the unfortunate events of last Thursday. I beseech you to heed these calls. The inaction of your government will amount to the complicity of your Presidency in those inexcusable acts.

Your Excellency, it has been my custom in recent times to abstain from the brouhaha of our public discourse, as I truly relish the solitude of private life. But silence in such a moment as this amounts to moral cowardice, and I owe it to my God, my family and my country to speak out against what is manifestly and unequivocally wrong. I urge you to act with haste to commission a public investigation into the circumstances surrounding the events at Ayawaso West Wuogon that justice may have its day.

This must be an investigation of true substance, one that will be palpably credible. Otherwise I fear our national memory of your legacy will be of a moral negligence that allowed us to go over the edge.

I conclude with the words of a hymn of my beloved Methodist Church, which I have been reminded of in recent days. I hope it will resonate with you as a man of faith, and that persons of moral authority in Ghana who shall chance upon this letter might stand for the right and echo its counsel:

Once to every man and nation

Comes the moment to decide,

In the strife of truth and falsehood, For the good or evil side;

Some great cause, some great decision, Offering each the bloom or blight, And the choice goes by forever Between that darkness and that light.

Though the cause of evil prosper, Yet the truth alone is strong; Though her portion be the scaffold, And upon the throne be wrong; Yet that scaffold sways the future, And, behind the dim unknown, Standeth God within the shadow, Keeping watch above His own.

Your Excellency, far too much has already been sacrificed for the future of this nation. I send you the assurances of my highest consideration in this matter.

I remain, Sincerely Yours,