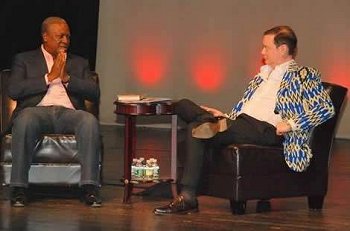 John Mahama should spare us the migraine. Hypocrisy and double speak has become an acceptable convention in the nation’s political culture so much that, the likes of John Mahama have little shame to right the wrongs that he personally supervised as the head of state.

I find John Mahama’s commentary on the Comprehensive Sexuality Education(CSE) debate, and his linkage of the policy to Lesbian, Gay, Bisexual, and Transgender(LGBT) practice to be extremely depressing, populist and hypocritical, especially coming from a former president. It is very hypocritical because the CSE policy didn’t start today. It was rolled out by the Ghana Education Service way back in 2016 by the then regime.

As a former president, he needed not engage in political theatrics and shenanigans with a government policy. It is just okay for him to attempt to do politics with this serious matter but I can’t fathom why this man can’t be serious for once.

The last time it was his ridicule to discredit attempt on the “Bentua Coup Saga, and now his loutish commentary linking this policy framework to Lesbian, Gay, Bisexual, and Transgender(LGBT)?

How opportunistic can Mahama be? You jump into a bandwagon of clueless people who do not seek for information before start commenting, and then proceed to make a fool of himself?

There are many questions that demand answers. First of all, isn’t Mahama a close associate of a famous LGBT advocate, Andrew Solomon? And didn’t he appoint Nana Oye Lithur a known advocate for the rights of sexuality concept and a campaigner for sexuality education as a minister and created Gender ministry?

Who convinced Mahana to set up the Gender & Social Protection Ministry? Wasn’t the motive to indirectly protect gays and lesbians from stigmatization?

So what is Mahama talking about? Such a character won’t be mute but will also want to be heard? What a contradiction!

The developments we see in the nation’s nation’s political space are a microcosm of an enduring muck that is slowly tarnishing the reputation of the nation’s finest politicians.

Let it be known to John  Mahama that teaching kids sex education does not wreck their future but corruption does. He should stop the hypocrisy and the double speak and redeem his ruined image.