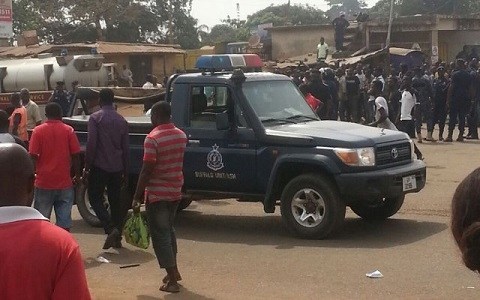 One person was allegedly killed while a woman was gang raped during an attack by armed robbers on passengers on the Yendi-Bimbilla road.

The passengers who were mostly market women were said to be traveling from the Gbintiri Market which is a popular weekly market in the North East Region when the incident occurred.

Some passengers who gave an account of what transpired said the armed robbers numbering about five, wielded 2 AK 47 assault rifles and cutllases.

They narrated that the robbers then blocked the road with electric poles between Pusiga and Ganguyili, both suburbs of Bimbilla before odering the passengers to lie face down on the road.

They said a KIA Rio vehicle which was on a top speed upon realizing the situation tried avoiding an accident and veered off the road, stepping on one of the passengers in the process.

The victim was pronounced dead instantly.

They said the robbers also made away with sums of monies running into several thousands of cedis.

The robbers who are suspected to be Fulanis are said to have taken turns to rape one particular woman.

No arrests have been made yet.