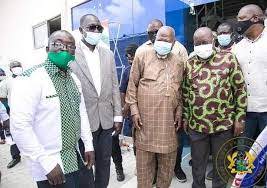 According to him, he had no idea how impactful the initiative would be to the people of the Central region, especially farmers, fishers, and factory workers.

“We took the 1D1F for a joke but we have realised that it can employ the whole community. The surprising thing is that the fishers are also planting pineapples for the Ekumfi factory,” he added

The governing party introduced One District One Factory initiative in 2017 to equip and empower communities to utilise their local resources in manufacturing products that are in high demand both locally and internationally.

This was to move the country towards industrialisation, increase its agricultural and manufacturing output, reduce the reliance on imports and increase the production of consumer goods and food availability.

Mr. Jacobs who was present at the commissioning of the ID1F projects in the region estimated that approximately 80% of the factory employees in Ekumfi Juice factory are women.

This, he explained, translates to money in the pockets of the people. He added that residents in the area are putting in efforts to maintain the factory’s upkeep.

The former regional chairman advocated for entrepreneurs and other interested investors to support the initiative and help create about 20 more factories in the Central Region for the benefit of the locals.

Mr. Jacobs stated that the 1D1F had won his support, although it is an NPP initiative because it is in the interest of the people.