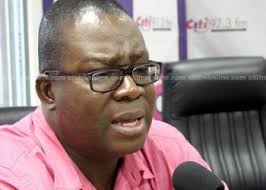 The National Association of Graduate Teachers (NAGRAT), has commended government’s policy proposal of the provision of free Wi-Fi facilities at all Senior Secondary Schools and public tertiary institutions nationwide if given another four-year mandate in the upcoming presidential elections in December 2020.

According to the President of NAGRAT, Eric Angel Carbonu, the implementation of the promise will among other things, lift the associated cost burden on institutions.

“This promise means that the huge challenge is going to be taken away from us; that is the cost in acquiring and purchasing data. It is a very useful thing if it is done. It will help us and help teaching and learning. We all know that in this COVID-19 era if we have had a very strong infrastructural base in IT, we wouldn’t have had problems”, he said in an interview on Accra based radio station, Citi FM on Monday, August 24, 2020.

Vice President Dr. Mahamudu Bawumia at the launch of the New Patriotic Party (NPP)’s 2020 manifesto in Cape Coast over the weekend, promised that Senior High Schools and tertiary institutions will be provided free Wi-Fi for their studies.

“We will also complete the provision of free Wi-Fi in all Senior Secondary Schools and public tertiary institutions”, he added.

He also has revealed that tertiary students will be able to access students’ loans without the need for a guarantor if the Akufo-Addo led government is given another four-year mandate in the upcoming December elections.

The beneficiaries will be given a year moratorium after NSS before they will be required to pay back the loans, he said.

He added that the Nana Addo administration will also focus on improving 10,000 low-performing schools in the country.

This, he said, will be done by giving them additional funding and support the teachers so they can raise the level of performance these schools.

In addition, he said the Akufo-Addo led government will build module senior high schools in Zongo communities in the 16 regions of Ghana.

According to Dr. Bawumia, government will increase resources and infrastructure for special need education across the country.

The Vice President also said that the administration will expand infrastructure to increase access to professional legal education.