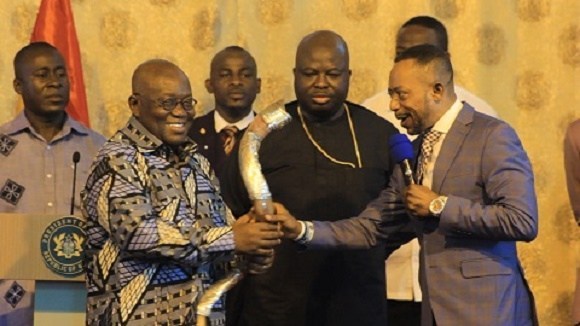 Opposition National Democartic Congress (NDC) Member of Parliament for North Tongu Constituency in the Volta Region, Samuel Okudzeto Ablakwa has bemoaned the deafening silence being exhibited by  president Nana Addo Dankwa Akufo-Addo in the wake of the prophesies by Rev. Isaac Owusu Bempah which triggered chaos recently and has generated controversy in the country.

According to him, in times such as this, showing leadership is of serious importance and that the president must hold the bull by the horn and openly condemn the man that has become known as his (President Akufo-Addo) spiritual father.

Citing an example in the United States of America to buttress his point, Mr. Ablakwa who is also the ranking Member for the Foreign Affairs Committee in Parliament said ‘’President Obama confronted by similar circumstances, distanced himself from his pastor, Rev. Jeremiah Wright for the latter’s offensive and divisive sermons. Indeed, President Obama publicly condemned Rev. Wright and subsequently resigned his membership from Rev. Wright’s Trinity United Church of Christ. It would be most inappropriate for President Akufo-Addo to continue hobnobbing and showing public affection for the beleaguered Owusu Bempah as he has done over the years’’.

He added ‘’that said, the choice is entirely Akufo-Addo’s to make. In this defining moment, will he show high moral leadership as Obama did or will he abdicate and keep mute for history to deny him a special place with President Obama?’’.