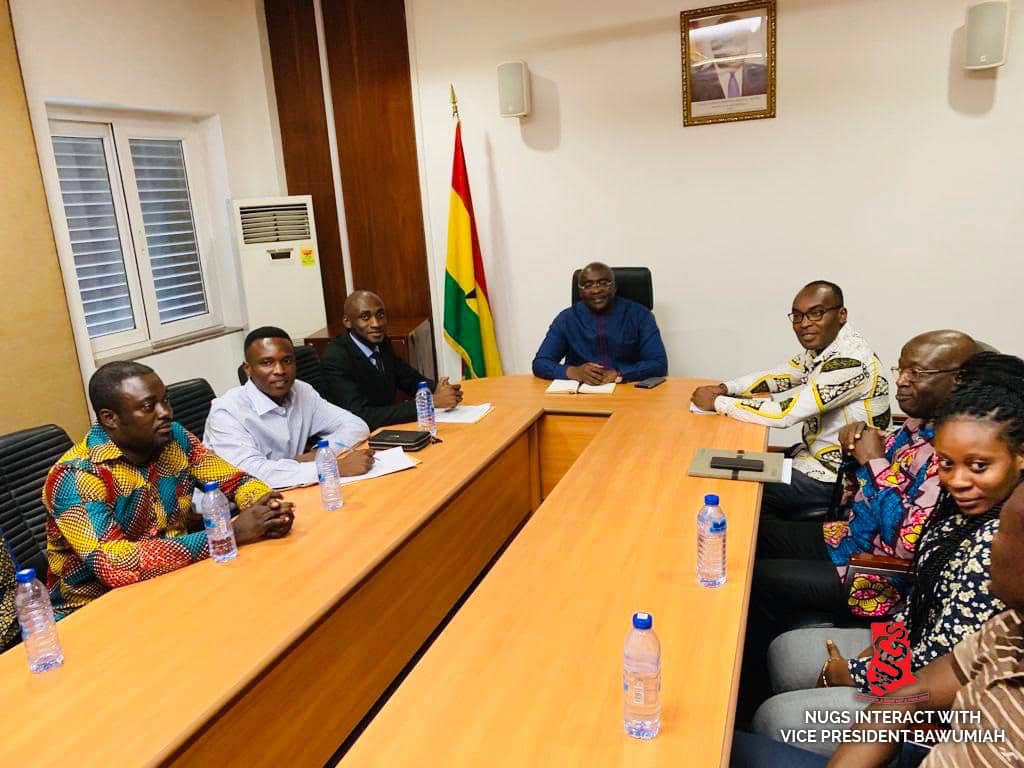 The National Union of Ghana Students on Wednesday, June 12, 2019 paid a working visit to the Office of the Vice President of the Republic of Ghana, His Excellency Dr. Mahamadu Bawumia at the jubilee house in Ghana.

The discussions centered on how to safeguard the safety of students in the light of increased insecurity as a result of the kidnapping, the sanitation drive by the Government and the recent flooding in the country, the digitalization agenda by the government and how NUGS can partner the Government in it’s development agenda for the nation.

The Vice President was elated to welcome the delegation of NUGS led by its President, Tinkaro Asare Osei.

Delving into the urgent question of insecurity and the recent spate of kidnappings, Mr. Tinkaro Asare Osei stated, “In a time that insecurity is set to encroach on our country’s peace, it’s prudent we link up with government to find robust, proactive and lasting solutions to it so we can protect our constituents, the future of Ghana. There’s fear and panic in our students and as a Union we are doing our best to calm them down and promote strong belief in our country’s security”.

The NUGS president commended the Government on the swift actions taken by the security services on the issue of the kidnapping of the  Canadian volunteers. He expressed confidence in the capacity of the Government to solve security challenges facing the country and urged the security services to put appropriate measures in place for the return of the three kidnapped girls from Takoradi.

Reflecting on the theme of sanitation, the NUGS President lauded the Government’s vision to make Accra, the cleanest city in Africa by 2020. He noted that the vision is possible only with the maximum cooperation of the Ghanaian people and pledged NUGS willingness to do it’s part to achieve this patriotic objective.

The Union commended the Vice President on the Digital Address System, the National Identification Card and other wonderful projects his office is spearheading.

Mr. Asare Osei outlined  some challenges, recommendations and possible partnerships between the Ghanaian student body and the Government. He commended Government for the work done in the sphere of education and indicated the availability of NUGS to support the Government’s quest to provide education for all Ghanaians.

His Excellency Dr Mahamadu Bawumia, the Vice President of Ghana encouraged the NUGS delegation to be relentless with their service to the Ghanaian Student and expressed Government’s readiness to work with NUGS on propagating the message of increasing sanitation standards in order to achieve the common goal of Accra being Africa’s cleanest city by 2020.

NUGS concluded it’s fruitful interaction with the Vice President by expressing gratitude and reiterating it’s appreciation  and commitment for the Government’s work.

NUGS met the Vice President as part of its mandate to engage all stakeholders in achieving greater access to education and to safeguard the rights of the Ghanaian Student and as part of the Unions reformation agenda.