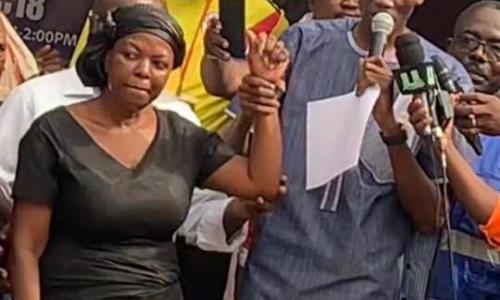 The widow of the late Member of Parliament for the Ayawaso West Wuogon Constituency, Lydia Alhassan who trounced her opponents yesterday Saturday December 29, 2018 to clinch the ruling New Patriotic Party’s (NPP) ticket to contest the parliamentary by-election in the constituency is set to battle it out with the opposition National Democratic Congress’ (NDC) Delali Kwasi Brempong on the 31st of January 2019, which is the date that has been set for the by-election by the electoral commission.

Maa Lydia as the Madam Lydia Alhassan is popularly known by her constituents won by a landslide, amassing a whopping 441 votes out of a total of 672 votes cast during the election which was held at the Dzorwulu Junior High School.

Her opponent in the NDC, Delali Kwasi Brempong who has had a shot at the seat in the constituency since year 2000 also garnered some 415 votes, while Selassie Agbo and former constituency secretary Ekow Acquah got 115 and 119 votes respectively.

BestNewsGH.com can report that a lot of rigorous campaigning is currently ongoing in the constituency with the candidates criss-crossing the nooks and crannies and selling their messages to the constituents.

The ruling NPP is looking at consolidating its popularity by retaining the seat which it has held onto for a very long time now, and the opposition NDC aims at making a statement should it win the election, that it is battle ready for election 2020.

The Ayawaso West Wuogon Parliamentary seat became vacant following the passing of the Member of Parliament for the area, Emmanuel Kyeremanteng Agyarko, on Wednesday, November 21.