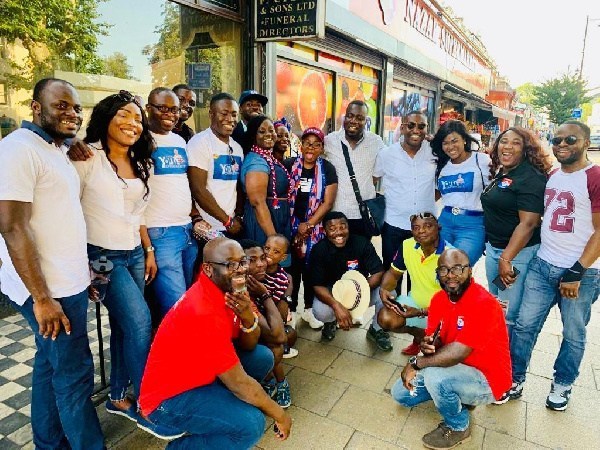 The NPP-UK Youth Wing, over the weekend, teamed up with the Loyal Ladies-UK for an Outreach Programme at the Dalston Market and on the Tottenham High Road, both in London, United Kingdom.

Located opposite Dalston Kingsland station, Dalston Market has been serving the local community since the 1880s. It’s East London neighbourhood has recently gained a reputation for its diversity whilst the market remains comfortingly un-gentrified. The over 150 stalls offer a fantastic array of Afro-Caribbean, Asian and European food products.

The Youth Organiser, Richard Gyamfi explained that “In 2016 when the party were in opposition, Mrs Rebecca Akufo-Addo and the then Women’s Organiser, Madam Otiko Djaba together with NPP UK campaigned at the Dalston and other popular markets in London and interacted with Ghanaian traders plying their trade”.

He added that “This was a follow-up to show appreciation to the many Ghanaians who listened to our campaign message and supported the party immensely in their various capacity”.

“It’s been a fulfilling day to have had our youthful and energetic Loyal Ladies-UK to join us led by their Captain, Rosemary Yaa Cullis”, he said.

The Youth Wing discussed current happenings in Ghana with concerned Ghanaians and used the opportunity to inform them of the many brilliant policies being undertaken by the Nana Addo Dankwa Akufo-Addo’s NPP Government.

The outreach culminated with “Kenkey Party” at the Oseikrom Restaurant on the Tottenham High road where the Youth Wing and the Loyal Ladies-UK continued their mobilisation and preparedness outreach towards election 2020.