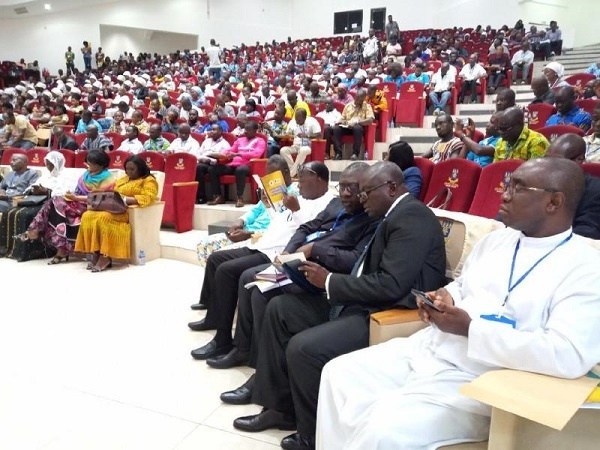 Six political parties at the end of a Multi-Stakeholder Conference organised by the Ghana Catholic Bishops’ Conference have accepted in principle the election of Metropolitan, Municipal and District Chief Executives (MMDCEs).

The representatives of the six political parties who made the disclosure in their submissions on Friday in Accra include Mr Freddie Blay, Chairman of the New Patriotic Party (NPP); Mr Johnson Asiedu-Nketia, General Secretary, National Democratic Congress (NDC); and Mr James Kwabena Bomfeh Jr, Acting General Secretary of the Convention Peoples Party (CPP).

However, Mr Mornah, was of the view that there was the need to tread cautiously on the issue of the election of MMDCEs; because at the local level, monetisation would equally affect the chances of the smaller parties.

The workshop, which was organised by the Ghana Catholic Bishops’ Conference with funding from the Konrad Adenauer Stiftung sought to promote effective representation and accountable local governance and in particular, the direct participation of political parties in local government elections and the election by the people of their MMDCEs instead of appointment by the President.

It would be recalled that the NPP Government in its campaign, prior to the elections of 2016, proposed direct election of the MMDCEs on the basis of political party representation rather than appointment by the President.

This, it is reasoned, would not only deepen democracy at the local level, but also make the MMDCEs more accountable to the people of the District.

However, as Article 55 (3) of the 1992 Constitution prohibits political party sponsorship of candidates for elections to District Assemblies or local government units, the Government proposes a referendum to amend the constitution to allow for the election of members of district assembly and MMDCEs based on political party representation.

Mr Asiedu Nketia said having operated the 1992 constitution for more than a quarter of a century, it had become very clear that provisions that bar partisan politics at the district level had become obsolete, hence the need to take a second look at it.

Mr Blay said the Government of the NPP was committed to ensuring that MMDCEs were elected.

Mr Bomfeh said: “The Constitution which is the legal architecture of our governance system generally is a problem. If we amend Article 243 that will take away the power to appoint MMDCEs from the President; and we fail to amend Article 55 (3), which stops political parties from participating, it would come to not.”

“I believe that we need a complete overhaul of the 1992 Constitution. Why we say so is that the power structure and its aggregation, mobilisation and allocation of resources if they remain the same as they are, we will be electing MMDCEs but we will be giving them no power.”

He said the CPP was of the view that no change could come about in this country if the generality of the citizenry do not change their minds and their attitude.

“Let us change our minds and attitude to support the change that we want in this country,” he said.

Mr Hammond said the PPP since its formation had been committed towards ensuring that MMDCEs were elected; stating that when it happens it would guarantee accountability at the local Government level.

Alhaji Frimpong described the purpose of the referendum that could lead to the election of MMDCEs as a floating light ball that could not be submerged by anybody.

Bishop Philip Naameh, Chairman of the Ghana Catholic Bishops’ Conference in a speech read on his behalf, said when successful at the constitutional amendment, the election of the MMDCEs would mark a turning point in local governance and development in the country.