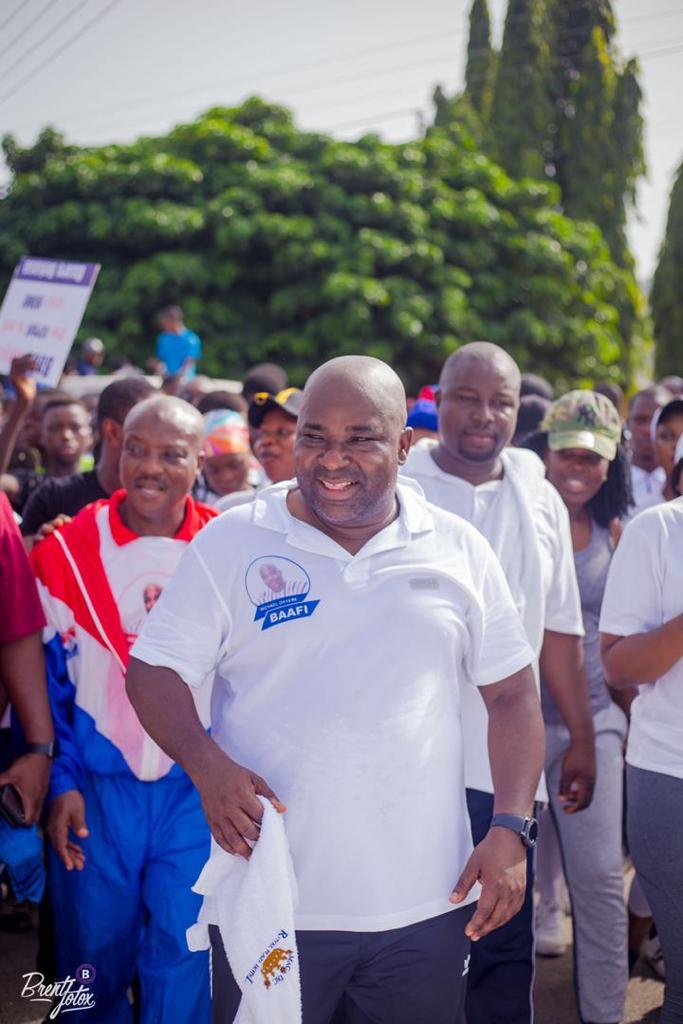 If the Easter Monday Health Walk organized by Friends of Kofi Baafi is anything to go by, then the safe conclusion one can arrive at is that the entire constituency of New Juaben South in the Eastern Region has fallen flat for the Chief Executive Officer of the Ghana Free Zones Authority.

The walk drew thousands of supporters of the ruling New Patriotic Party and non-supporters alike on to the street of the constituency who sang, danced, exercised and cheered on Mr. Baafi who is seeking to be the constituency’s legislator in the 2020 elections.

Thousands of people particularly from Nsukwaw, Surodae, Mile 50, Betom and its environs hiked the principal streets of Koforidua on Easter monday to exercise and appreciate the legendary selflessness and philanthropism exhibited by Mr. Kofi Baafi over the years.

Mr. Baafi siezed the moment on that day to formally announce his intention to contest the ruling New Patriotic Party’s Parliamentary Primaries in the constituency.

This means he will be up against the incumbent Member of Parliament for the Constituency, Mark Assibey Yeboah.

Eminent citizens: Mr. Opoku Sarkodie and Mr.  Acheampong could not hide their appreciation of the many philanthropic works done by Mr. Kofi Baafi.

In an interview with both Mr. Opoku Sarkodie and Mr. Acheampong, they indicated that Mr.Michael Okyere Baafi has exhibited a true sense of patriotism and have the requisite competence to steer the affairs of the constituency when given the opportunity.

Friends of Kofi Baafi is an association (mostly constituents of New Juaben South) who believes  in the ideologies and capabilities of Mr. Michael Okyere Baafi,erstwhile 1st Vice-Chairman, New Juaben South Constituency and the CEO of Ghana Free Zones Authority.