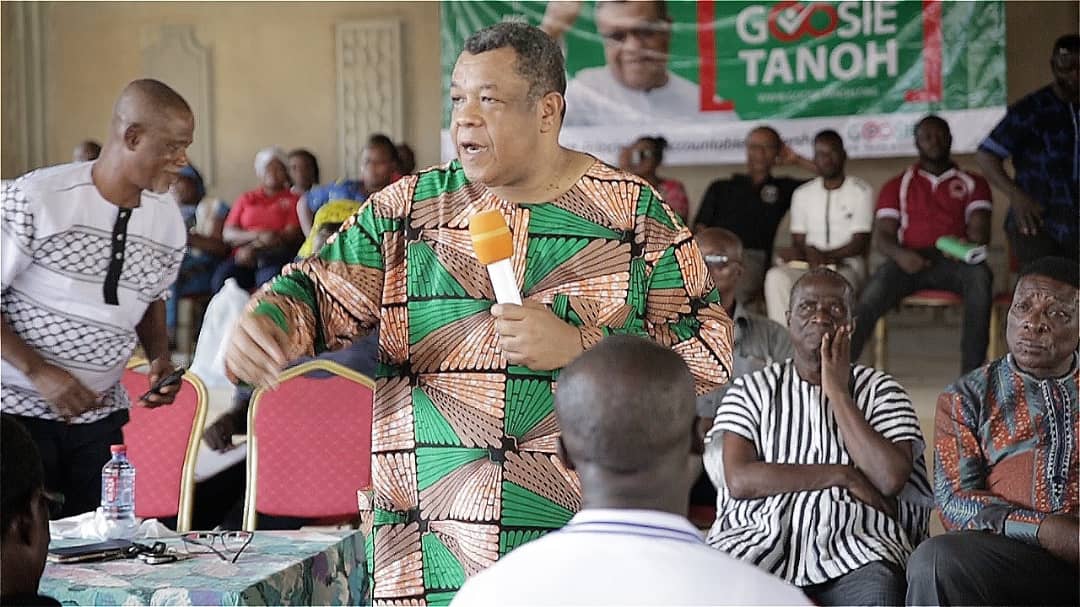 The auditorium used for a meeting involving NDC presidential aspirant Goosie Tanoh and delegates at Hohoe constituency in the Volta region was thrown into a state of ecstasy amidst thunderous applause when a branch chairman of the party grabbed a microphone and said Mr. Tanoh was “smelling like a president” meaning he looked just like a sitting president.

The comment sparked jubilation among the audience and was endorsed by several other delegates who also took turns to either make a comment or endorse the candidature of Goosie Tanoh during the Question and Answer session of the program.

The delegates also described him as the second Jerry John Rawlings who had come to redeem the soured image of the opposition National Democratic Congress and take the party back into government.

They said Goosie Tanoh’s physical appearance coupled with his character traits of selflessness, hardworking and principled personality was like that of their darling NDC founder Mr. Rawlings who won the hearts and minds of millions of Ghanaians during the revolutionary days.

Many NDC branch and constituency executives in the Volta Region Mr. Goosie Tanoh engaged, declared their total support for him to lead the party as presidential candidate for the 2020 general elections.

The delegates contend that Mr. Goosie Tanoh a former aide to former President Rawlings was their sure bet for electoral victory and urged other party delegates across the country to elect him to lead the party into election 2020.

The delegates maintained that Mr. Goosie Tanoh had demonstrated beyond doubt that he is a key strategist, a grassroot mobilizer and a crusader who is poised to lead the NDC party to wrestle political power from the ruling NPP government.

Goosie Tanoh this week began a nationwide campaign to solicit votes from NDC delegates ahead of the party’s presidential primaries election in December 2018.

He has been touring the Volta region for the past 6 days where he enjoyed overwhelming support from hundreds of NDC faithful.

Some of the delegates who heard Mr. Tanoh speak could not keep quiet but publicly declare their unflinching support for him.

“I was inspired when he spoke about grassroots empowerment, it encouraged me a lot so personally I have endorsed him. This is the kind of people we need to build the better Ghana agenda. He is so handsome and I am voting for him”, a female delegate at Hohoe constituency told the gathering.

Mr. Goosie Tanoh expressed his profound appreciation to the party’s members for reposing confidence in him and pledged his support for them and asked the delegates to have confidence in him always and vote massively for him to lead the NDC.

He also promised that the grassroots of the party would be the center of his governance if elected as a president in this country.