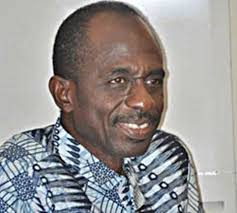 General Secretary of Opposition National Democratic Congress (NDC) Johnson Asiedu Nketiah has called the bluff of his opponents who are contesting the General Secretary position of the party, saying he doesn’t compete with amateurs, and apprentices, but whips them.

According to him, he will win with a landslide which numbers has never been recorded in the party’s electoral history.

The three time NDC General Secretary who is popularly known as General Mosquitoe expressed utmost confidence of beating his opponents with chicken ease.

He faces the toughest challenge yet, from his deputy,  Koku Anyidoho who seems to be giving Mr. Asiedu Nketiah a good run for his money.

He maintains that Mr.  Anyidoho does not pose a threat to him, insisting that his position is not under threat at all.

Mr. Asiedu Nketiah in his recent media interview monitored by BestnewsGh.Com said the masses of the party are clamouring for his retention.

He stressed that he has the support of the required number of voters to retain his seat for four consecutive terms.

Mr. Asiedu Nketiah’s confident posturing is in sharp contrast to the growing concerns among some supporters of the NDC who believe he has failed to keep the NDC in government during the 2016 presidential elections which the NDC lost to ruling New Patriotic Party (NPP).

Many political pundits are shocked at the challenge since this is the first a deputy is challenging his boss for the position in the history of the NDC.

They are predicting General Mosquito could lose the position given the groundswell of support for Mr. Anyidoho by leading members of the NDC.

But General Mosquitoe has downplayed it saying the election slated for November, 2018 will be a cool chop because NDC delegates will reward his hard work.

“I believe that the masses of the party are calling for my retention because when you are driving and you reach the rough part of the road, that is not when you hand over the steering wheels to an apprentice, that is where it takes the experience of the driver to steer the vehicle out of the rough road”. Asideu Nketiah told host of GHone TV state of Affairs, Nana Aba Anamoah and monitored by BestNewsGH.com