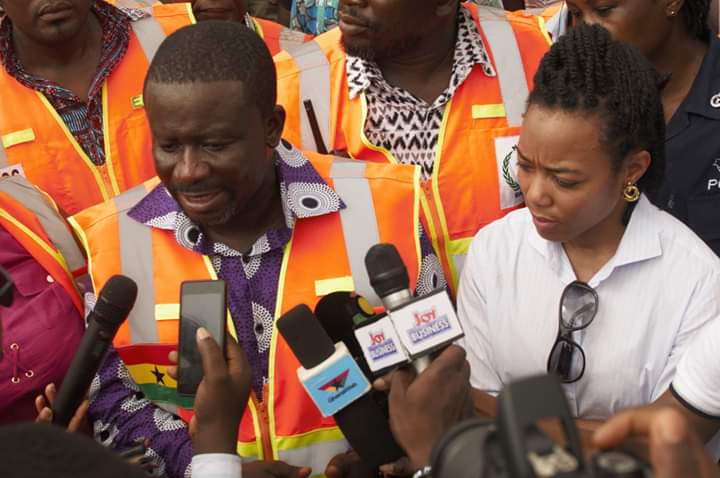 In the early hours of Thursday, 17 January, 2019, the National Disaster Management Organisation (NADMO) after dispatching its rapid response team from the operations department to salvage the situation at the Circle-Odawna market fire scene, with other officers from the district and its regional offices, later sent an official delegation to the scene to meet with the affected victims.

The team which was led by the Director General of NADMO, Hon. Eric Nana Agyemang prempeh first met with representatives from the Ghana Police Service, Ghana National Fire Service, BNI, Accra Metropolitan Assembly, Member of Parliament for Osu Klottey and the Market Executives in a brief meeting to make heads way before addressing the affected victims.

Hon. Eric Nana Agyemang Prempeh in a remark while addressing the victims expressed sympathy on behalf of NADMO and the government of Ghana for their loss and assured that necessary measures will be put in place by NADMO and its collaborating agencies to ensure victims are safe and relieved from the current trauma.

He also added by saying that there’s the need for the victims to exercise patience for officials to do a thorough assessment of the damage so as to put better measures in place before reuse of the scene to avoid similar occurrences in the near future.

Member of Parliament of Osu Klotey Hon. Dr. Zanetor Rawlings was also present at the scene to visit the affected victims who are members of her constituency.

She encouraged the victims to come together to support the officials in executing their duties in order to enable them to go back quickly to their routine since that is their source of livelihood and later cautioned them not to politicize the incident but rather see themselves as Ghanaians to support each other.

A meeting by NADMO and all stakeholders is scheduled to be held on Monday 21, 2019 to present their final assessment reports for further action.

The incident was reported to have started at 7:45 on January 16, 2019 however it was officially reported to the Rapid Response Unit of NADMO at about 8:50 pm in the evening.