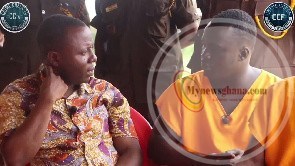 Eric Kwesi Marfo, a former inmate of the Nsawam prison lost his child a few days after he was sentenced to 18 months in prison for unsettled debts.

Eric who shared his sad story with Ibrahim Oppong Kwarteng on Crime Check TV further revealed that his beloved wife also died two weeks after their child’s death and he didn’t have the opportunity to bid either of them a proper farewell.

According to Eric, his daughter fell off a swing in school and broke her neck and he didn’t have money to foot the hospital bill at the time so he turned to his close friend for help.

The friend who had helped Eric secure a job as a driver at Access Bank was kind enough to lend him the GH¢2,000 he needed to foot his daughter’s hospital bill as well as an extra GH¢2,600 to pay his landlord who was demanding house rent at the time.

They agreed that Eric will pay back the money after a month but after a few days, the friend asked for the money back.

“He asked for the money after four days but I told him I couldn’t get it for him at the time… his fiancée’s family asked him to come for a proper introduction or else they would marry her off to another man who had returned from abroad so he needed the money to do that,” Eric narrated.

His friend kept pressurising him for the money and Eric who had some links with CEO of Rufftown Records says he called Bullet for assistance but the latter said he was out of town at the moment and will get back to him on his return.

He got a call from the Kotobabi police station to come over and he went there to meet the uncle of his friend who is a police officer.

“His uncle told me to pay back the money since he needed it for something but I told him I couldn’t pay then…I stayed in cells that evening and was taken to court the following day,” he stated.

Even though the judge and lawyers in court agreed that case wasn’t one meant for court, Eric was still sentenced to a GH¢1,800 fine or in default had to spend 18 months in prison.

Three days after he was sent to the Nsawam prison, Eric who hadn’t informed his family of the issue at hand called his wife to find out how their daughter was doing but he was met with the sad news of the child’s death.

“My wife also died about two weeks after our daughter’s death.”

According to Eric, his friend who is responsible for him ending up in prison visited when he was at Nsawam but he refused to see him.

Thanks to Crime Check Foundation, Eric has been able to pay the fine and has been released from the James Camp prison where he was serving the final months of his sentence.