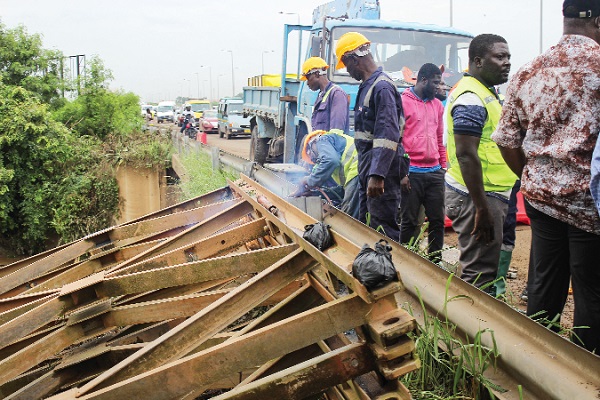 Reconstruction of the Accra-Tema Motorway will begin in August this year, the Minister of Roads and Highways, Kwasi Amoako-Atta, has said.

He said the government had reached a financial agreement with a private investor for the project to commence.

Mr Amoako-Atta made this known yesterday when he paid a working visit to the motorway.

He was accompanied by engineers and directors of the various agencies under the ministry.

The visit followed a Daily Graphic front page report titled ‘A year on, Accra-Tema Motorway still in bad shape’, which was published last week and highlighted the level of deterioration of the country’s only concrete motorway after five weeks of monitoring as a follow-up to a similar exercise in March last year.

Mr Amoako-Atta explained that the condition of the motorway was a source of worry to the government, and as a result, its reconstruction would be treated as a priority.

“I want Ghanaians to know that this entire motorway stretch from Tema to Tetteh Quarshie in Accra measuring about 19.5 kilometres is going to be rehabilitated and we are at the concluding part of the discussion, so maximum by August we are going to cut the sod for work to start. The contractor has already been selected,” he said.

Already, he said a commercial agreement had been sent to Parliament for approval while a financial agreement was being prepared for the legislature to give the red light for the commencement of the project.

“It ( motorway) is going to be changed under the government of President Akufo-Addo, and the work goes beyond Tetteh Quarshie. Even though the project name is Accra-Tema Motorway project; it goes all the way to Apenkwa and stretches to Neoplan in Achimota,” he said.

Mr Amoako-Atta explained that the motorway, which was opened to traffic in November 1965, had outrun its full design life and had to be changed.

As a result, he said the government would concentrate on the original Tema roundabout to Tetteh Quarshie in Accra as the first phase of the project before the rest would be tackled later.

“Because of the speed of work, we are going to divide the project into three phases. The first is from Tema roundabout to Tetteh Quarshie; the second is from Tetteh Quarshie to Apenkwa and the last from Apenkwa to Neoplan,” he said.

He added that the entire project would take about four years to complete.

“Tetteh Quarshie itself is going to be remoulded to take off the current traffic congestion that we experience there. So it’s a huge project that is going to start from August. The entire stretch could have taken about four years but we are doing it in phases and we will work with speed and of course without sacrificing quality, and by the end of 2024 we would have done substantial work on this stretch,” the minister said.

On how traffic will be managed when the project begins in two months, the minister said due to the busy nature of the motorway, the ministry was working around the strategies that would be deployed to divert traffic when the construction began.

“We will make sure that traffic will be managed professionally so that we reduce the inconveniences,” he said.

Meanwhile, he said the Mobile Maintenance Unit of the ministry would continue its maintenance works to keep the motorway motorable.

“Currently our MMU is on the road checking all the potholes to make it motorable for motorists. Maintenance is an ongoing thing for all roads,” he said.

The Director of Bridges at the Ghana Highway Authority (GHA), Yakubu Koray, said the La Klapa River Bridge, also known as ‘Abattoir Bridge’ would be replaced in three weeks.

The works to replace the bridge, he said, would begin next Friday without which it would collapse.

“The replacement is going to be a reinforcement concrete slab that we expect to start on Friday and the whole work to be completed in three weeks.

“Certain sections of the deck slap have developed defects and we need to replace that. The works are going to involve cutting them into sections and reconstructing it,” he said.