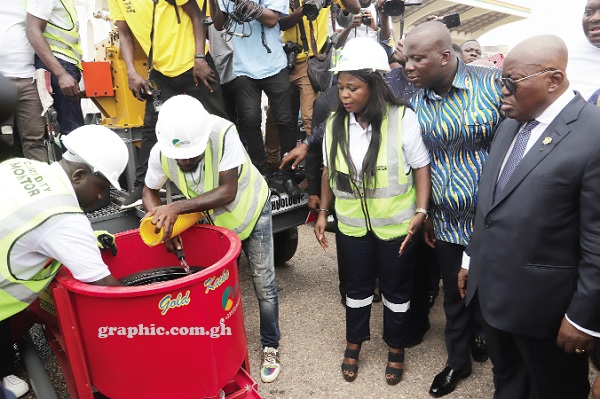 The intervention is also meant to do away with the harmful effects of the use of mercury for gold production.

The mercury-free machine consists of a jaw crusher that crushes bigger rocks from 40 millimetres (mm) and above, reducing them to three millimetres; a milling plant which crushes the particles further into fine particles of about 100 microns, and a concentrator or gold catcher (kacha), where the fine gold particles are washed and aggregated.

It has a high gold recovery rate of 90 per cent compared with the other methods that do between 30 per cent and 35 per cent of gold.

With the gold kacha machine, mining processes such as scrubbing, crushing and milling happen at the same time as the concentrator washes the ore body and recovers both fine and coarse gold.

In the artisanal small-scale mining (ASSM) sector, mercury is mixed with gold-containing materials to form a mercury-gold amalgam, which is then heated, and the mercury vapourised to obtain the gold.

The process has been found to be very dangerous as it leads to significant mercury exposure and poses health risks.

At the commissioning in Accra yesterday, President Akufo-Addo stated that the government was procuring 300 more of the equipment, under the National Alternative Employment and Livelihood Programme for use in the various communities where the programme was being implemented.The President indicated that the goal was to eliminate gradually, but as soon as possible, the use of mercury in small-scale mining and help realise the objectives of the Minamata Convention on Mercury.

“Let me reiterate once again, a clear message. The Akufo-Addo government is not against small-scale mining. On the contrary, the government is in full support of responsible, small-scale mining activities as they provide avenues for Ghanaians to participate in the mining industry and contribute substantially to the development of our gold sector,” he stated.

He explained that what the government abhorred was mining that did not pay heed to the preservation of the environment which threatened the very survival of Ghanaians and the legacy they sought to bequeath future generations.

President Akufo-Addo noted that the government would continue to pursue policies and programmes that would promote responsible and sustainable mining practices and contribute to national development.

He expressed the hope that the beneficiaries of the equipment would put them to good use for their own benefit and that of the country.

President Akufo-Addo said to halt the devastating activities of illegal miners that was destroying water bodies, polluting the environment, among others, the government took drastic measures to halt them and launched a series of programmes intended to provide good economic livelihood options to illegal mining and its associated activities.

He explained that the measures were also to enable those adversely impacted the opportunity to work and support themselves and their families legitimately.

Other programmes rolled out by the government, he noted, included a national Reclamation and Reforestation project to reclaim degraded lands and transform them into economically viable lands while creating job opportunities for the youth, landowners and communities at large.

President Akufo-Addo noted that the government had revamped the Community Mining Scheme to promote responsible, sustainable small-scale mining, a move that would support the Bank of Ghana’s recent policy to purchase gold domestically to shore up its reserves and to contribute to the retention of value of Ghana’s mineral resources in the country.

The Minister of Lands and Natural Resources, Samuel Abu Jinapor, described the gold kacha technology as the revolution for the small-scale mining sector by promoting responsible mining that would protect the environment.

He said the mercury-free equipment was being deployed in compliance with requirements of the Minamata Convention on Mercury, a global agreement on environment and health, adopted in 2013.

The convention, which came into effect on August 16, 2017, recognised the risks of using mercury in artisanal and small-scale gold mining and calls upon nations to reduce, and where feasible, eliminate mercury use in the sector.

Mr Jinapor said the gold kacha machines would be distributed to actors in the small-scale mining sector in a transparent and fair manner to ensure that pollution of water bodies through the use of mercury was halted.

“We deploy the mercury-free machines with an unflinching resolve to construct a viable and responsible ASSM industry that contributes meaningfully to Ghana’s economy,” the minister said.

Mr Jinapor stressed that the government would continue to roll out interventions that would help to crackdown on illegal mining activities in the country.

“Admittedly, the galamsey menace is not over yet, but we will not rest; we will continue to fight it until we win,” he said.

He indicated that over the past six years, the Ministry of Lands and Natural Resources had implemented numerous interventions to sanitise the SSM sector.

For his part, the Chief Executive Officer of Commodity Monitor, Stephen Yeboah, called on small-scale miners to embrace the gold kacha technology and stay away from the use of mercury and other chemicals for mining.

He said such chemicals did not only affect those directly involved in mining, but also the larger society.

For instance, Mr Yeboah said, the uncontrolled use and exposure to mercury in artisanal and small-scale mining put miners and their communities at risk of permanent brain damage, seizures, vision and hearing loss, and delayed childhood development.

In an interview at the commissioning of the gold kacha, the CEO of Commodity Monitor stressed that irresponsible mining activities, especially the use of chemicals, threatened the country’s forest resources and natural landscapes.

Mr Yeboah explained that the mercury-free gold mining machine was a major departure from the use of Chanfang machines and mercury for mining where less than 50 per cent of gold was recovered.

He said the gold kacha machines had the capacity to produce between 1.5 to three tonnes of gold ore an hour.

“The mercury-free machine which recovers a minimum of 90 per cent of the gold, helps miners to improve efficiency and mine sustainably because it does not use mercury,” he stated.

“You create a pond system, the water flows into it and you reuse it; so it becomes a very sustainable cycle of water management. This will help the miners to stay away from direct water mining where they depend on water bodies,” he said.