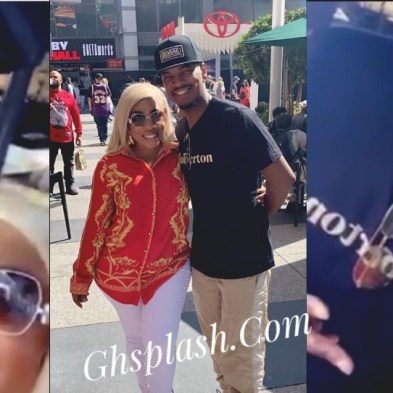 Ghanaian actress and socialite, Moesha Babinoti Boduong over the weekend flew to the US and has been making a lot of people envious as she has been sighted hanging out with several famous stars. In a new video posted on her Instagram account, Moesha was seen hanging out with popular American R&B singer, Neyo.

Moesha Bodoung who is on a holiday tour to the United States of America was the only Ghanaian celebrity aside Hailliote Sumney to represent Ghana at the  Black Entertainment Television (BET) Awards.

According to her, she had her name on Hollywood Walk of Fame and also walked the Red Carpet at the BET Awards.Ghpage.com, however, chanced on a video where she was being ordered to step off red carpet stage as it is for ‘celebrities’ only.

Well, in order to resecure her glory, the socialite decided to post a video where she was seen hanging with legendary RnB artiste, Neyo.