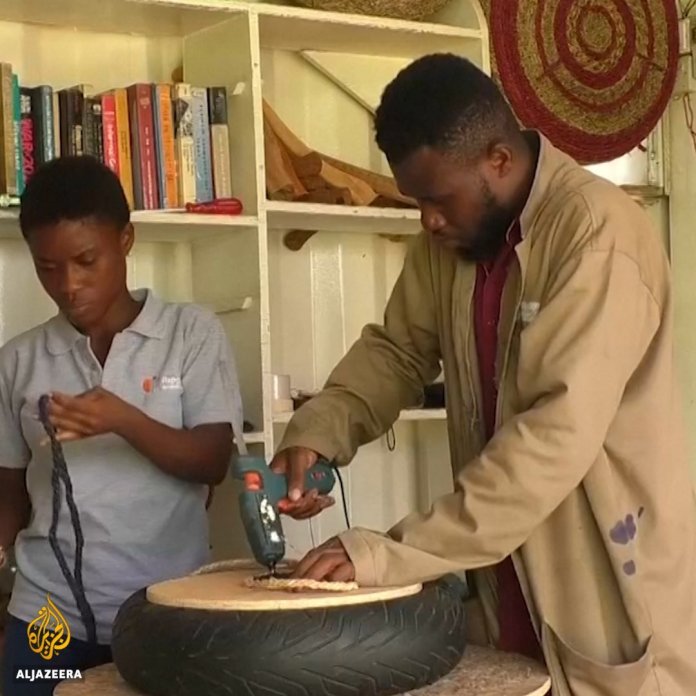 Jeffrey Kwabena Yeboah is a young entrepreneur who makes coffee tables, arms chairs and other types of furniture from recycled tyres which he collects from landfills sites and second-hand dealers. He uses glass, fabric and coloured ropes to produce his designs.

According to him, the idea of interior deco was nurtured when he was a student at the University of Ghana around 2014-2015.

He said during that time things were very tough for him because he needed to pay his school fees and also take care of himself but he was not getting the needed help from his family.

“I realised that all the guys on campus wanted to keep their room nice to be able to attract the ladies so I decided to create a concept for rooms where I started making wallpapers, paintings, stickers among others,” he said.

Jeff indicated that his work grew from campus and the demands were keeping him busy. The idea of making tables came when a client he met wanted a table which is different from what is already in the market.

After roaming the streets Accra, he could not get the exact table that his client needed until he saw that some people were burning car tyres at Dzorwulu junction then he got the idea of making a table from the car tyres.

He noted that the only means we depose car tyres in Ghana is through burning but most people do not know the harmful effect associated with the burning. 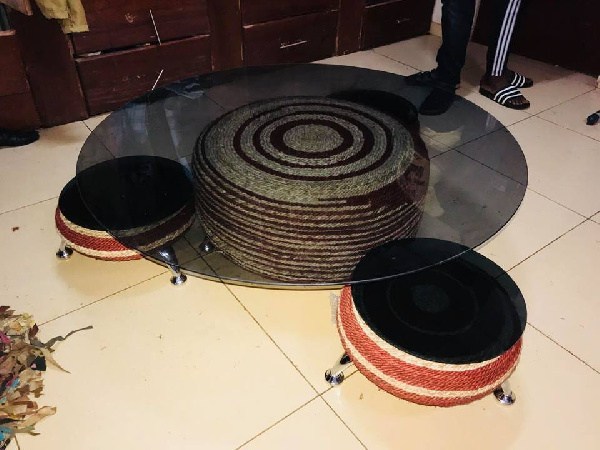 He told Al Jazeera that he feels he is part of a problem-solving community.

Jeffrey Kwabena Yeboah is also a part-time economics student, who started his business 5 years ago. He employs 2 workers and trains aspiring furniture entrepreneurs.

Many of his clients order custom-made designs or select them from his furniture catalogue. His prices vary from GHC200 to GHC1200 or $30 to $250 per piece.

Jeff’s market is mostly online thus most he sells his products on his social media handle ‘Ripples Interior Decor’. He aims at promoting recycling and educating people about waste management.

A client of Jeff, Rukiyetu Abubakari said she patronizes Jeff’s product because it is locally made.

“The only exciting part of it is that it’s made in Ghana and I want to buy it and promote our products,” she said.