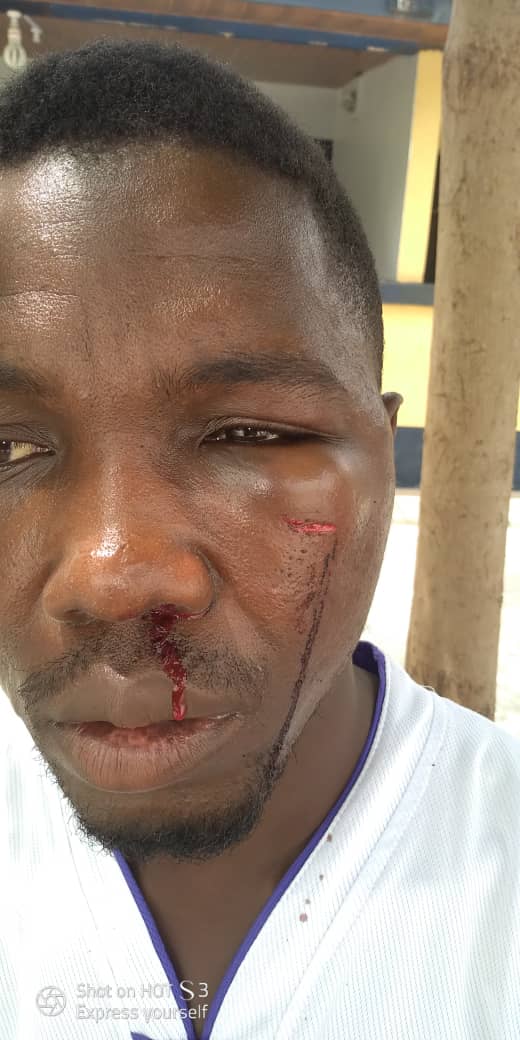 The Ashaiman Divisional Police Command is investigating a case of causing bodily harm involving a man who claimed to be a National Security operative.

According to a 22-year old mobile money operator, Issaku Salifu, this morning at about 1000hrs he was at work on near the busy traffic when he  saw a biker approaching in the opposite traffic from the direction of Unibank.

Suddenly, the bike collided head on with another bike which was in the authorized lane leading to both bikers and riders crashing to the ground.

The said National Security operative later identified as Ayuba Mustafa, 33, without seeing to the other rider jumped onto his bike and attempted to runaway.

The mobile money operator went on that when he enquired from Mustafa why he was not attending to his fellow rider, the said operative who allegedly introduced himself as an officer shouted at him to keep mute and threatened to slap him if he Salifu persisted and eventually slapped him.

According to him, Mustafa got back on the bike but returned, brought a handcuff which he used to hit his face.

As the self claimed National Security operative attempted to move, he the victim held tight to the back of his dress leading to the rider and bike going down for the second time.

A mob, he said from nowhere emerged at the scene took charge of the said operative and handed him to two policemen in mufti.

He was alleged to have verbally introduced himself to them as a police officer and when confronted to show his  station, having realized persons who took charge of him were policemen, stated at the station that he is rather a National Security operative.

The Ashaiman Divisional Police Commander, Chief Superintendent Samuel Amissah confirmed they are investigating such a case.

Chief Superintendent Amissah stated that the suspect claimed that he never impersonated a police man but stated being an officer which was misconstrued by the mob to mean police.

Meanwhile both complainant and suspect, now on bail, have been issued with police medical forms to attend hospital.

The police boss intimated that investigation would certainly include the claim by the suspect of belonging to the state security apparatus. Stay tuned for more on this edevloping story.