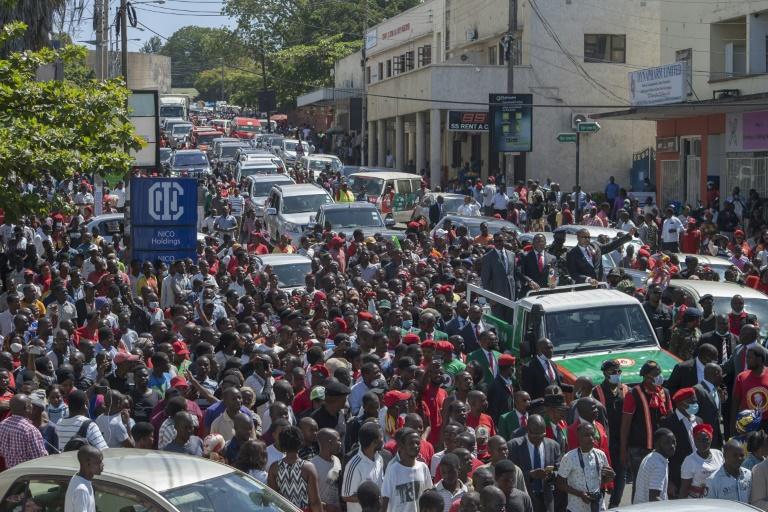 Officials and experts are sounding the alarm as Malawi shifts to top campaign gear with giant rallies for an unprecedented presidential re-run despite the coronavirus outbreak.

The southern African country will hold elections in just under two months after the Constitutional Court overturned the results of last year’s controversial elections, which handed President Peter Mutharika a second term.

Mutharika gained just 38.5 percent of the May 21 vote but the Constitutional Court annulled the result, citing “grave” and “widespread” irregularities including the use of correction fluid on ballot papers.

According to the electoral commission, the elections are due on July 2 but could be brought forward to June 23.

Thousands of supporters have gathered and shoved shoulder to shoulder despite a ban on large gatherings as they cheer on their candidates who handed in their papers last week.

“Elections or not, we need people and we cannot be sending them to the grave because we want to win an election.”

“We’re being careless. If the leaders themselves cannot even observe social distancing, who will be telling people about the seriousness of the pandemic?” he said.

Malawi’s coronavirus cases now stand at 63 including three deaths since the first case emerged on April 2.

No lockdown has been imposed but the government has ordered public gatherings to be capped at 100 people.

A court last month blocked the government from imposing a full lockdown because it had failed to announce any measures to cushion the vulnerable.

“We are really concerned with the gathering of people for political rallies,” said Health Ministry principal secretary Dan Namarika.

“We have seen huge gatherings, this is would defeat the fight against coronavirus,” he said.

Opposition leader Thoko Namitowa doubt whether the virus had reached Malawi and said she would not be discouraged from attending rallies.

“Do we really have coronavirus in Malawi? I doubt! If we had coronavirus here, we would be dying in numbers. In Italy, 800 people were dying a day,” she said.

She said the official infection figures were a ploy by the government “to stop the election form happening.”

“The government put in place regulations regarding COVID-19 but they are the first ones who broke those same rules. So, how do they expect the rest of us to adhere to these rules?” party general secretary Eisenhower Mkaka said.