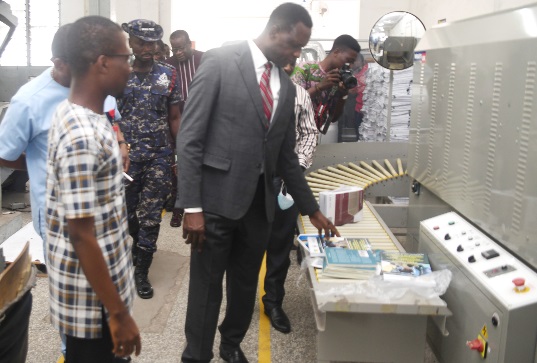 Five local printers have disclosed that they have commenced the printing of government textbooks for basic schools under the new curriculum.

The printers which have secured the printing contracts have three months to complete the jobs and a month to deliver the books to the schools.

The disclosure was corroborated by the Minister of Education, Dr Yaw Osei Adutwum, when he interacted with members of the Editorial Team of the Daily Graphic in Accra last Wednesday.

The minister said the publishers had submitted signed documents with local printers to his office and had been given the green light to print the textbooks.

Dr Adutwum announced that the United States Agency for International Development (USAID) had already offered to print English Language textbooks for pupils from Kindergarten (KG) to Primary Three for free.

He added that some of the books had already been delivered to the schools.

The minister, during his visit, took time to inspect ongoing work at the G-PAK press, where some of the USAID-sponsored contracts were being executed.

The acting General Manager of G-PAK, Kingsley Mate-Korle, confirmed that his outfit had started the printing from one of the two publishers that signed up with the company.

He said the company started the printing in earnest a fortnight ago and was confident that it would be able to meet the timelines set out by the ministry.

Daily Graphic checks with Sec-Print also indicated that printing was progressing earnestly, with the assurance that the company would be able to meet the 120-day timeline for the execution and delivery of the books to the schools.

At Jay Kay, the Business Development Manager, Isaac Nanekum, said his company was given the green light last week and so it had started the printing.

He said the company had enough logistics and the capacity to complete the contract before the deadline.

The General Manager of Appointed Time Printing Ltd, Jacqueline Afful, said her company had started the printing, stressing that it had the capacity to execute the contract within the 120-day timeline.

But, in an interview, the President of the Ghana Printers and Paper Converters Association (GPPCA), James Appiah-Berko, said the secretariat was not making contacts with its members to ascertain the real figures for the contracts, including the quantities given to the printers.

“Our printers said not all the people who contracted them had given them the quantities they were supposed to get because the proposed quotation by the publisher to the ministry has been reduced,” he explained.

Consequently, Mr Appiah-Berko said, the association had written to the Ministry of Education to furnish it with the quantities to enable the monitoring team, which had already been constituted, to ask the critical and appropriate questions during its rounds.

“We sent a letter to the ministry requesting for the quantities, but it said it won’t give it to us because it is a public document and that we should go to the Public Procurement Authority (PPA) for it,” he recounted.

He said at the PPA, the GPPCA was informed that the information was still with the ministry, “so we have written back to the ministry and are waiting for the response”.

The monitoring team is made up of representatives from the publishers, the printers, print professionals and the Book Development Council.

Mr Appiah-Berko said the team already had information on the modalities for the monitoring, which was expected to begin before the end of the week, after a meeting with the chief executive officers of the five printing companies.

“We are told that the National Council for Curriculum and Assessment (NaCCA) is still effecting corrections in some of the works; hopefully, when the books are endorsed, those printers will also secure the contract,” he said.

In June last year, the government announced ceding 100 per cent of the printing of textbooks for pupils in basic schools to local printers.

For a start, the textbooks to be printed will cover kindergarten to primary six.

However, any publisher without an agreement with a local printer will not be considered.

Consequently, all publishers who were already pre-qualified were asked to present signed agreements with local printers.

The Minister of Education, who had announced the government’s decision, said: “Any publisher without an agreement with a local printer will not be considered in the offer.”

Previously, the printing of textbooks was mostly done outside the country, with local printers complaining that it was a disincentive to local businesses.

In some cases, a minimal percentage was given to local printers, while the bulk of the printing was done outside the country.

In 2016, however, the then government decided that the printing of textbooks for schools would be done by local printers, and by 2017 when the printing actually began, more than 40,000 people were employed in the sector.

Aside from employment opportunities, the contract also afforded local printers the opportunity to build their capacity and expand their operations.