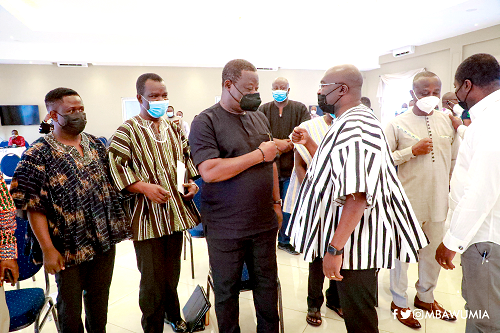 The Vice President, Dr Mahamudu Bawumia, has urged the New Patriotic Party (NPP) Members of Parliament (MPs) to strengthen the bond between Parliament and the Executive to help fulfil the promises made to Ghanaians and further earn their trust to continue governing the nation.

That, he said, would require that the Majority caucus continually armed themselves with the “great success stories and achievements” chalked up by the Akufo-Addo-administration to dismantle any propaganda churned out by the opposition.

Dr Bawumia made the call at a workshop for the Majority Caucus and members of the Executive last Saturday at Mpraeso in the Eastern Region.

Reminding the MPs that they were an integral part of the success or failure of the Executive and by extension the NPP administration, Dr Bawumia urged them to work extra hard to respond appropriately to any attempt to downplay the achievements of the Akufo-Addo-administration.

“The propaganda machinery of the National Democratic Congress (NDC) will be oiled using their representation in Parliament. Every conceivable government policy or intervention will be furiously attacked.

“There is no better group to respond to these attacks, to set the record straight and to match them “Boot-for-Chalewote” than the Majority Caucus of Parliament,” he stated.

He said the NPP needed to tell its story and to let Ghanaians know how the party had been able to reduce, though not completely eliminated, the hardships.

“With the right set of facts, you are expected to challenge the NDC’s propaganda and educate Ghanaians on NPP’s sterling economic performance by establishing, as a matter of fact, that the NPP administration has managed the economy better,” he stressed.

The General Secretary of the NPP, Mr John Boadu, called for the maintenance of synergy among the party’s rank and file to keep the party on track and focused to win the 2024 polls.

The Deputy Majority Leader of Parliament, Mr Alex Afenyo-Markin, urged his colleagues to employ the services of social media and every opportune platform of mass media to vehemently defend the record of the party, and sell the vision of the party.

He said though some citizens would make unpleasant and unpalatable arguments about some unfavourable conditions in the country, the members of the NPP must, as a duty, continue to work hard and speak on the numerous good works of the government.