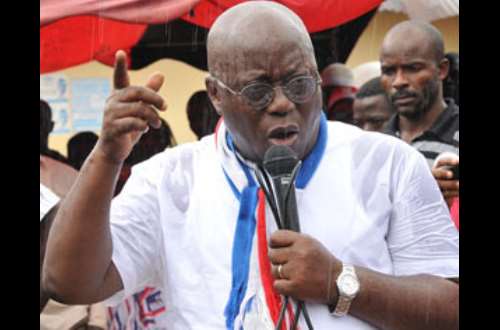 President Akufo-Addo has indicated categorically that he will not back anyone who declares an interest in succeeding him as the New Patriotic Party’s flagbearer.

He says as outgoing President, leaning towards any of the candidates can cause disturbances in the party.

“My duty is to hold the balance, to make sure that there is a level playing field for all inside our party. The decision has to be the decision of the party, my thing is that whoever the party elects as the flagbearer for 2024, that person is who I will support and God willing, if I have strength campaign for the person to become President”, he said on Pure FM in Kumasi.

According to the President, it is relevant for the party to stay in power to ensure sustained development.

“I always say, our situation in Ghana, if the NPP government had continued after President Kufour, maybe Ghana would have realised the desired changes but we didn’t have the opportunity to continue.

“We continued the eight-year cycle. Mills and Mahama came as far as I am concerned, we went backwards again and I have a fear that may happen again if we don’t win 2024 and that has given birth to the slogan break the eight”, he added.

The President, commenting on the qualities of who becomes the next NPP flagbearer, mentions the ability to unify the party as very critical.

Though the President wants the NPP to stay in power, he believes it should be by the ballot box and not any other means.

So far, some names have emerged as persons interested in the contest, including Vice President, Dr. Mahamudu Bawumia.

The President at Manhyia Palace on October 1, 2021 introduced Alan Kyeremanteng, Trades and Industry Minister, and Dr. Owusu Afriyie-Akoto, Minister for Food and Agriculture, as individuals eyeing his seat.