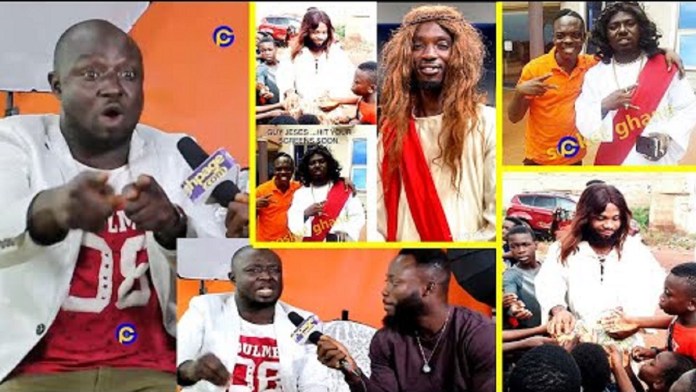 In an exclusive interview with GhPage TV, Ogyam fired these Kumawood actors for copying Mmebusem and trying to bring him down.

Ogyam explained how Salinko decided to introduce Mmebusem to the ‘Ghana Jesus’ idea after he returned from the United States of America.

He revealed that after the video went viral, Mmebusem requested more money but Salinko refused to heed to his offer which infuriated him and later decided to start his own production.

Salinko who felt betrayed rained curses on Mmebusem for being ungrateful and ordered him to bring back his ‘Jesus’ attire.

However, recently two Kumawood actors have also decided to imitate Mmebusem and also act as the local Jesus.

Another Kumawood actor Kobby 1 was introduced by Salinko to replace Mmebusem as the New Jesus.

According to Ogyam, he cannot comprehend why these actors will imitate Mmebusem while they can also coin their own idea.

He rained insults on them labelling them as hypocrites adding that this is one of the main reasons why the movie industry is failing.

Watch the interview below;

Ogyam explained that there is so much hatred, backbiting, hypocrisy, greed and selfishness in the Kumawood movie industry.