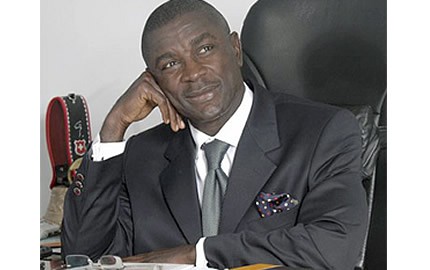 The founder and CEO of the now-defunct UT Bank, Mr Prince Kofi Amoabeng has described as unfair and unfortunate, the revocation of the licence of Ghanaian-owned Heritage Bank Ghana Limited, whose founder has always argued that the bank was collapsed despite its books being above board.

Asked directly by Accra-based TV3’s Paa Kwesi Asare in an interview on Business Focus: ‘Do you think, as many think, that some of the decision to close down certain banks was politically motivated?’, Mr Amoabeng answered thus: “A few of them, specifically Heritage Bank”.

“I don’t understand the issue because the Chairman of the Board is Dr Kwesi Botchwey. I have a lot of respect for him when it comes to finance in this country and managing Boards and he will not, in my estimation, ever accept to be Chairman of a bank that is not right and dealing in all sorts of things.

“I can say that for him, so, I find it extremely odd that a bank – and it had not started doing business for it to have bad loans and all those things – and for you to say that the owner didn’t have what it takes or however they put it, I mean the owner doesn’t run the bank, he’s a Ghanaian, he’s got money, he’s appointed the right people to run the bank for him, so, what is the excuse.

“I find that extremely, extremely unfair”, Mr Amoabeng asserted, adding: “Maybe I don’t have all the facts, but from where I stand, I find it really unfortunate”.

The Bank of Ghana revoked Heritage Bank’s licence on Friday, 4 January 2019 on the basis that the majority shareholder, Mr Seidu Agongo, among other things, used proceeds realised from alleged fraudulent contracts he executed for the Ghana Cocoa Board (COCOBOD), for which he and former COCOBOD CEO, Dr Stephen Opuni are being tried, to set up the bank.

Announcing the withdrawal of the licence, the Governor of the central bank, Dr Ernest Addison told journalists – when asked if he did not deem the action as premature, since the COCOBOD case was still in court – that: “The issue of Heritage Bank, I wanted to get into the law with you, I don’t know if I should, but we don’t need the court’s decision to take the decisions that we have taken. We have to be sure of the sources of capital to license a bank; if we have any doubt, if we feel that it’s suspicious, just on the basis of that, we find that that is not acceptable as capital. We don’t need the court to decide for us whether anybody is ‘fit and proper’, just being involved in a case that involves a criminal procedure makes you not fit and proper”.

However, Mr Agongo responded with a press statement in which he said that the “not fit and proper” tag stamped on him by the central bank was “capricious, arrogant, malicious and in bad faith”.

According to Mr Agongo, “In purportedly making the determination, the central bank obviously had little regard for the time-honoured principle that a person is presumed innocent until proven guilty by a court of competent jurisdiction”, adding that: “The fact that I have a case pending before the High Court is a matter of public knowledge but my guilt or innocence is yet to be determined by the Honourable Court”.

“The determination that I am not a fit and proper person to be a significant shareholder of HBL because the central bank suspects the funds are derived from illicit or suspicious contracts with Cocobod is not only calculated to pre-judge the outcome of the criminal proceedings but also violative of the principle of presumption of innocence to which every individual is entitled. Since when has suspicion become a substitute for credible evidence?” Mr Agongo asked.

Also, the erstwhile Prof Botchwey Board issued a statement on the matter in which it said: “Heritage Bank was by the Bank of Ghana’s own admission, a solvent bank. It NEVER received liquidity support from the Bank of Ghana. Its corporate governance record had never been impugned by the Bank of Ghana. We believe we have been done a grave injustice and a terrible precedent set that does not bode well for the future”.

Read that full statement below:

The Bank of Ghana on Friday, 4th January 2019 announced the revocation of the banking licence of Heritage Bank Limited on the following grounds;

(1) Suspicions relating to the source of the bank’s capital and matters related therewith including the claim that it was derived from contracts with COCOBOD which were the subject matter of an ongoing criminal prosecution;

(2) Issues around the shareholding of the bank and alleged nondisclosure of ultimate beneficial shareholders;

(3) several related-party transactions which were not above board

(4) the significant shareholder was not ‘fit and proper”.

We would have preferred not to enter into any public disputation about these matters with the Central Bank so as not to further darken the cloud that hangs over the ongoing banking sector reforms. However, we owe a duty to ourselves, our cherished customers and our dedicated staff, who, in the face of numerous challenges remained committed to the vision of the bank to the very end, and to the general public, who have been keen observers of the developments in the banking sector, to clarify certain claims in the press release by the Bank of Ghana that are either complete falsehoods or inaccurate at best. We wish, therefore, to state as follows:

We find it puzzling that the Bank of Ghana should now be disputing the existence of a contract between HBL’s main shareholder and COCOBOD, when the bank, as part of its due diligence ahead of the granting of HBL’s provisional banking licence, had requested and received confirmation from COCOBOD of the existence of the contractual arrangements between COCOBOD and the said shareholder.

We also want to state on record that Heritage Bank NEVER RECEIVED, nor is the Board aware of any order from the High Court (or any other court for that matter) for disclosures relating to any contract involving Mr Seidu Agongo. Indeed, we are hearing of this matter for the VERY FIRST TIME through the Governor’s news conference. In any case, we are unable to fathom why the High Court would order Heritage Bank to make disclosures in respect of a contract that it is not a party to or a custodian of.

On the issue of the transfer of an amount of GHS15.8m and the acquisition of some properties owned by the main shareholder which were stated in the Financial Statements of 2017, it will be misleading on the part of Bank of Ghana to claim that the bank and its shareholders, directors and management have failed to clarify matters. The records at the bank are very clear on these transactions and could have been very easily verified by the Banking Supervision Department if, indeed, they had any issues with the figures.

Furthermore, the Bank of Ghana, through the Banking Supervision Department WAS NOTIFIED IN WRITING about these entries. A Sale and Purchase Agreement covering the acquisition of the buildings, together with copies of the Valuation Reports from a competent property valuation firm were all duly forwarded to the Bank of Ghana. From the documents referred to above, there is, thus, no basis for any doubts about the name of the shareholder whose property was being acquired.

The valuation reports from the professional valuers also do give the basis of the valuation; and do, indeed, establish the basis for the prices agreed and captured in the Sale and Purchase Agreement that was executed between the two parties in the transaction. Even disregarding the correspondence sent to the BOG on this matter, A TEAM FROM THE BANKING SUPERVISION DEPARTMENT of the Bank of Ghana did carry out an onsite inspection in July 2018 (last year).

(3) The grounds for the revocation of HBL’s licence also included a claim that the bank had approved ‘several related-party transactions’, that is loans and facilities to its main shareholder. Three companies were cited in the Governor’s statement:

SASSH ALLIANCE: Heritage Bank gave facilities totalling GHS6m; an Overdraft of GHS3m, and a Bank Guarantee of GHS3m, which were fully collateralised, were subjected to the standard credit requirements and were duly approved by the Board in accordance with S.67 of Act 930. These are the only transactions with SASSH ALLIANCE.

MOOR COMPANY LIMITED: The company had a vehicle leasing contract with Heritage Bank by which it provided the bank with its vehicles. This contract was terminated when the bank purchased the vehicles.

KEDGE COMPANY LIMITED: The company rents out properties to some of Heritage Bank’s branches.

All the above transactions were handled in a transparent manner and at arm’s length. Apart from the credit facility to Sassh Alliance, Heritage Bank has no exposure to any of the companies mentioned.

(4) The significant shareholder was not fit and proper

It is not clear to us how the Bank of Ghana came to this conclusion, but this is a matter obviously best dealt with by the said shareholder in any manner that he shall deem appropriate. Suffice it to say only that neither the bank nor its directors or shareholders were afforded the statutory notice period by the Bank of Ghana, within which to have responded to the allegations made prior to the abrupt revocation its licence, contrary to the provisions of the very same law under which the licence was revoked.

As a Board, we had engaged with the Bank of Ghana including the Governors on numerous occasions, ALL in relation to meeting the capital requirement, and at no time had the issues now being given as grounds for the revocation of the bank’s licence been raised. Indeed, as recently as December 24, 2018, the Bank of Ghana had given Heritage Bank clearance for a potential investor who had brought proof of funds to transfer the money. We had considered and applied for consideration under the Ghana Amalgamated Trust scheme and had received positive signals. We were literally in conversation with our prospective investor when the bank was summoned at about 12 p.m. to a meeting at 2 p.m. and handed a letter revoking the bank’s licence.

Heritage Bank was by the Bank of Ghana’s own admission, a solvent bank. It NEVER received liquidity support from the Bank of Ghana. Its corporate governance record had never been impugned by the Bank of Ghana. We believe we have been done a grave injustice and a terrible precedent set that does not bode well for the future. We have dealt herein only with matters affecting the Board’s responsibilities that needed to be clarified to set the record straight, and this, without prejudice to whatever legal options the shareholders may wish to avail themselves of in order to get justice for the even greater harm done to them.