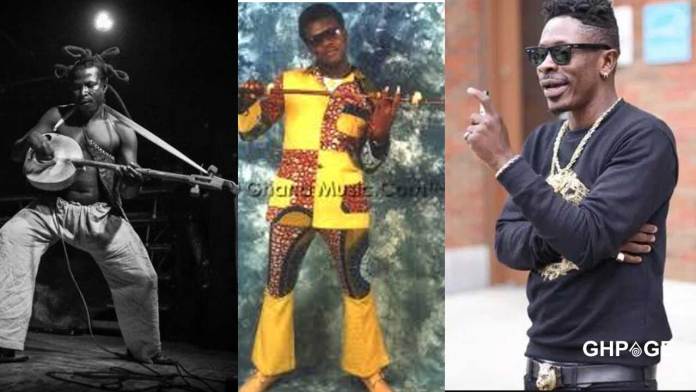 Mother of late Terry Bonchaka, Mrs Charlotte Adjetey, has revealed in an interview with TV Africa that after the death of her son, she’s being taken care of by King Ayisoba and Shatta Wale.

According to the mother, after his death 16 years ago, she was taken to PSI by Ambrose who was his manager then to collect an amount of GHC2,000. She says since then no money has been received so far from royalties adding that it is King Ayisoba and Shatta Wale who have always been there for her.

In his days, he was the one who gave King Ayisoba the platform to perform with his popular kologo instrument and the rest has been history.

On October 29, 2003, Ghana entertainment industry was struck with one of the saddest news up to date when it was announced that the ‘Pulele’ hitmaker had passed away in a car crash on the Legon-Madina road while returning from a show at the Akuafo Hall Celebration at the Nation’s premier university, University of Ghana.

According to what was reported, the car in which Terry was driving suddenly veered off the road and hit a tree causing him to die at the spot.

During his days on earth, he captivated Ghanaian music lovers with his songs including; ‘Puulele,’ ‘Zoozey,’ ‘Ghana Ladies,’ ‘I’m Aware,’ Ghana Ladies’ and ‘Asem Ben Ni’.