Dancehall act, Charles Nii Armah Mensah, popularly known as Shatta Wale, has sent out a warning to event organisers in the country who would want to contract him for shows next year, 2020. Following the low turn out of fans at Cardi B’s concert in Ghana where Shatta Wale was billed to perform but did […]

Award-winning dancehall musician Shatta Wale has opened up on ways that help him to make money from show business. According to the CEO of Shatta Movement Empire, he prefers to focus on making money than receiving awards. In an interview with Kisa Gbekle on the Business Of Entertainment Show, Shatta Wale expressed interest in making […]

Dancehall artiste Shatta Wale has shown the world why he is the richest artist in Ghana as he presented GH¢ 150,000 worth of electrical gadgets to the Amansie West District farmers when he joined them to celebrate ‘Farmers Day’. The self-proclaimed dancehall King in an encouraging speech praised farmers for their good work at Amansie […]

Mother of late Terry Bonchaka, Mrs Charlotte Adjetey, has revealed in an interview with TV Africa that after the death of her son, she’s being taken care of by King Ayisoba and Shatta Wale. According to the mother, after his death 16 years ago, she was taken to PSI by Ambrose who was his manager […]

Over the years, Shatta Wale has always bragged that he is the richest musician in Ghana. For the first time, Shatta Wale has backed his claims with figures to shame critics. According to Shatta Wale in an interview on “Entertainment Review” hosted by Kwasi Aboagye on Peace FM, he is currently worth over 10 million […]

Dancehall artiste Shatta Wale yesterday as part of his birthday got the biggest surprise of his life when he finally reunited with his baby mama and his son Majesty after months of separation. Shatta Wale has for months now been “crying” on social media begging to see his son Majesty who was taken away by […]

American female rapper, Mariahlynn Araujo, has said that Shatta Wale is the number 1 musical artiste from Ghana. She revealed this while performing at a concert today. The video was shared on her Instagram stories which sees her pouring praises on the African Dancehall King. Mariahlynn and Shatta Wale has a song together titled ‘Be Strong‘. As […]

Self acclaimed Dancehall King, Shatta Wale has revealed that his humility and respect for the police has earned him an enviable position in which he is allowed to continue to smoke marijuana. According to him, he has consistently surrendered to the authority of the police anytime he is caught smoking weed and that his mature […]

Self acclaimed Dancehall King, Shatta Wale has admonished his fans to be guided in their dealings with the police, particularly when it has to do with arrests on allegations of smoking marijuana. According to him, anyone caught smoking weed must do the needful by begging the police and not unnecessarily engage them in any form […] 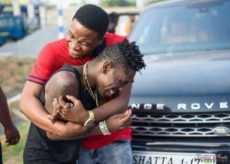 Celebrities Buzz have over the past few months been following Shatta Wale and his best friend Solash very closely. Solash according to the Dancehall musician is like his right hand man. It’s widely known that Solash is an event organizer and he does business with the African Dancehall King aside their enviable friendship. However, per our […]

Self-acclaimed Ghanaian Dancehall King, Charles Nii Armah Mensah, known by many as Shatta Wale says women who have come into his life have had no positive impact on him. According to him, these women were destructive and just came into his life just for fame and nothing else. Speaking in an interview, the “Level” hitmaker […]

MTN Ghana is gearing up for its annual blood donation exercise which main objective is to rally the generality of the Ghanaian people to donate blood to stock the various blood banks across the country. BestNewsGH.com reports Corporate Services Advisor for Southern Ghana, Mr. Kennedy Ofosuhene as indicating during a motivation session for the company’s […]