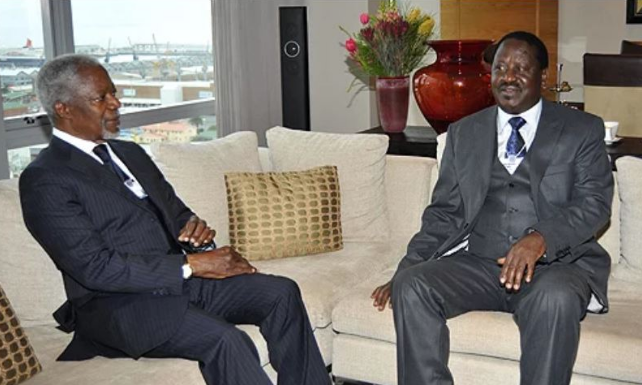 Former Prime Minister of Kenya, Raila Odinga is expected in Ghana on Thursday as a guest at the burial ceremony of former UN Secretary-General Kofi Annan in Accra.

Mr. Odinga’s Spokesman, Dennis Onyango told the media Mr. Odinga who leads the opposition Orange Democratic party will arrive in Ghana after stopping over briefly in the United Arab Emirates

“Mr Odinga left the country this afternoon for a brief stop-over in the United Arab Emirates before proceeding to Ghana for Dr Annan’s burial on Thursday,” Mr. Onyango said in a press statement.

The statement added that Mr Odinga will be away from the country for about a week.

He will join other Kenyan leaders including the Kenyan National Assembly Speaker Justin Muturi who President Uhuru Kenyatta chose as his special envoy at the burial of the former UN boss on September 13.

Mr. Kofi Annan passed on in Sweden 3 weeks ago after a brief illness at the age of 80.

His remains were flown into the country on 10th September, accompanied by his wife Nane Maria Annan and their 3 children.