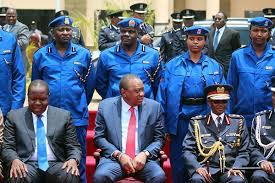 The government of President Uhuru Kenyatta has set in motion, moves that will ensure that Police uniforms are not fitted with pockets.

It is the belief of the government that the pocket-less uniforms will help stem corruption within the police Service in the country.

Indications are the government has taken several measures in the past, aimed at nabbing the canker of corruption within the Kenyan police Service with no results.

The move has been seen by political and Security analysts as a desperate move by the government to deal with the issue.

Information available is indicative of the fact that there is some disquiet among the rank and file of the police officers, who are unhappy about the move.

They argue that the pockets in the uniforms, help beautify their appearance.