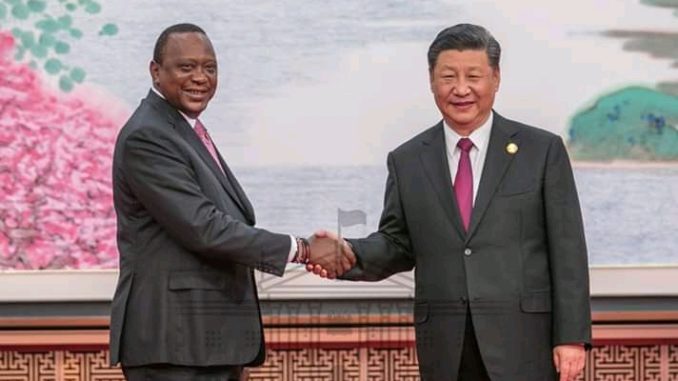 Kenyan President Uhuru Kenyatta has rejected China loan totaling to 325 Billion Shillings. In his defense the Kenyan president said it will be difficult to run the country with all the loans they have received from China.

Already Kenya is facing huge amount of Loans from Both World Bank and China.

Some of the collaterals of China loans include Mombasa port. Some countries like Zimbabwe have faced the wrath of not paying Chinese loans as their ports have been taken over by China.

Kenyan president has been facing criticism over huge Chinese loans.

The Kenyan president’s rejection of foreign media criticism regarding Nairobi’s debt burden confirms that countries receiving aid and other forms of support are in the best position to judge China’s cooperation with the African continent, an analyst said.

Asked in a CNN interview on Oct 26 whether he worries about rising loans from China, Kenyan President Uhuru Kenyatta questioned why the focus was on one particular lender while Kenya also receives funds from other states and organizations.

Kenya has a very healthy mix of debt from various lenders in addition to China, including the United States, Japan and France, as well as the World Bank and the African Development Bank, he said. Kenya has its own development agenda, he said, and is willing to partner with all countries that help it achieve its objectives.

China’s foreign financing support is based on recipients’ needs and local conditions, and focuses on capacity building in those countries, Zhang said, adding that the efficiency and influence of the cooperation with China is obvious to all.

Foreign media’s dwelling on the “debt trap” is biased and demonstrates that they lack objective understanding of China’s cooperation with developing countries, he added.

During the joint news conference with PNG Foreign Minister Rimbink Pato, Wang said that China’s foreign aid is carried out on the basis of equality, mutual benefit, openness and sustainability.

China’s aid for Pacific countries represents mutual support and assistance between developing countries, and is an important part of South-South cooperation, Wang said.

Beijing’s foreign aid is offered on an equal basis, with full respect for the will of the governments and people of the recipient countries. It comes without interfering in domestic affairs or any political strings attached, he said.

The country always ensures that foreign aid is mutually beneficial, taking into consideration the financial sustainability of the recipients when carrying out aid projects, he said.

China offers foreign aid in an open manner, he added, and is willing to carry out third party cooperation with other countries.

Moreover, China’s foreign aid is sustainable and is aimed at empowering recipients to overcome their development bottlenecks and achieve self-supported and sustainable development, he said.

China always places a priority on justice. This approach can stand the test of time and the judgment of the international community, Wang said.

Those who criticize China’s good deeds should instead do more themselves to help Pacific island countries, he added.