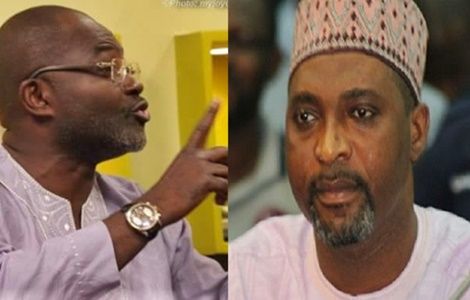 According to him, the two legislators who have been in parliament for a very long time and are supposed to be role models to young MP’s and politicians have dragged the name of parliament into disrepute by their action in the floor of the house.

The Assin Central MP yesterday Wednesday, January 30, 2019 confronted his Asawase counterpart over a motion he raised on the floor of the house demanding that Mr. Agyapong be dragged before the privileges committee to answer for his role in the murder of slain lead undercover investigator for Tiger Eye PI, Ahmed Hussein-Suale.

Mr. Mubarak accused Mr. Agyapong of complicity in the murder for exposing the identity of Mr. Suale on his privately owned Television station, Net 2 TV.

This did not go down well with the vociferous MP who confronted Mr. Mubarak on the floor shortly before the business for the day started.

But the Nsawam Adoagyir legislator is not enthused at all with the action of his two senior colleagues saying ‘’the two of them must sit, because they are not in parliament on their own, they are there because some people put them there. If they cannot do the parliamentary work then they should just bow out. You can’t go to parliament and exchange such unprintable words in the full glare of the media. What are you telling us, what impression are you giving of such an important institution. I condemn their action and the two senior members in the house must bow down their heads in shame’’.