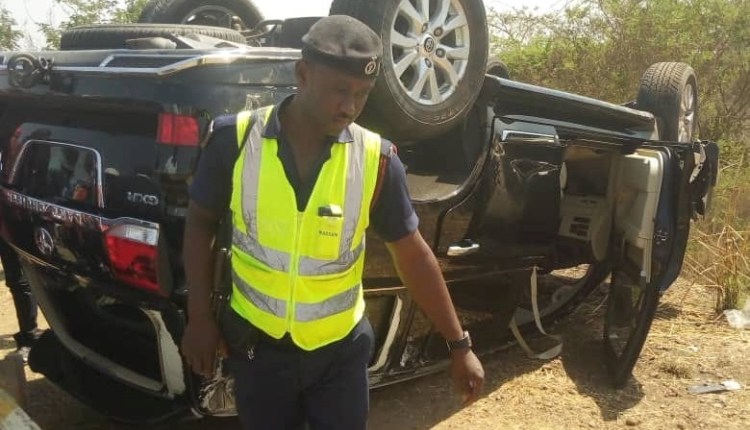 A Toyota Landcrusier V8 vehicle belonging to ruling New Patriotic Party strong man, Gabby Asare Otchere-Darko has somersaulted at Yapei in the Central Gonja District of the Northern Region, while on its way to Tamale for the investiture of the new Yaa Naa, Yoo Naa Abukari Mahama in Yendi.

Information available to this Website indicates that the vehicle was in the government convoy heading for Tamale as an advanced team, ahead of the arrival President Nana Addo Dankwa Akufo-Addo later today.

The driver and the bodyguard who were in the vehicle are said to be receiving treatment at the Tamale Teaching Hospital, while the whereabouts of Mr. Otchere-Darko was not known as he was not in the vehicle at the time of the accident.

The president is expected in the Northern regional capital today, Thursday, January 24, 2019 ahead of the investiture of the new Yaa Naa.

The president and the government delegation will leave Tamale tomorrow Friday, January 25, 2019 for Yendi, for the investiture of the new Yaa Naa, who beat 3 others to emerge the overlord of the Dagbon kingdom.

Until his selection as the Yaa Naa, Yoo Naa Abukari Mahama was the chief of Savelugu in the Northern region.

President Akufo-Addo and Otumfuo Osei Tutu II, the Asantehene and leader of the committee of eminent chiefs have both expressed confidence that with the performance of the funerals of the Yaa Naa Mahamadu Abdulai IV and Yaa Naa Yakubu Andani II and the subsequent selection of the Yoo Naa as the New Yaa Naa, the Dagbon Kingdom will be restored to its former glory of greatness.