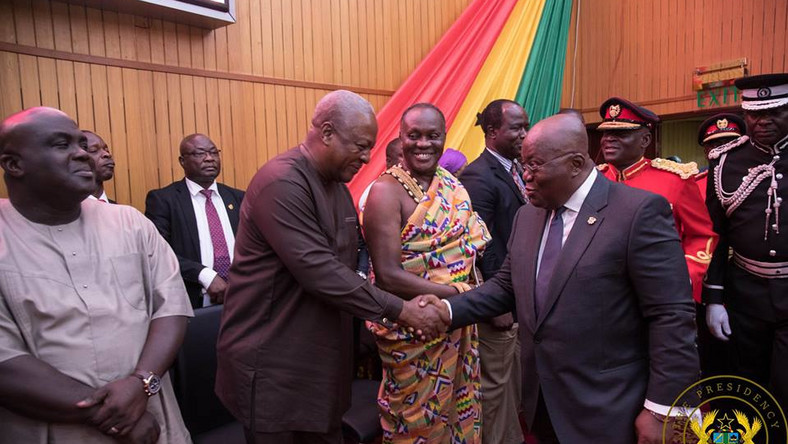 Former President, John Mahama, has revealed details of his Jubilee House meeting with ex-President Jerry John Rawlings and ex-President John Agyekum Kufour on Tuesday, April 18, 2017, at the invitation of President Akufo-Addo, insisting there was no consensus at the close door meeting with his successor on the referendum.

Mr Mahama, described some of President Akufo-Addo’s comments as “unfortunate” and suggested he did not tell the truth in last Sunday’s broadcast to the nation over the abortive referendum.

The National Democratic Congress’ (NDC) 2020 flagbearer’s detailed revelation, thus leaves ex-Presidents Rawlings and Kufuor to tell the nation as to who – Mahama or Akufo-Addo – is speaking the truth on the referendum.

“I think it was unfortunate for him to have said that it was hypocrisy on the side of the NDC,that was wrong. It was not only the NDC that rejected, but the Catholic Bishops also said ‘no’ the National House of Chiefs said ‘no’ and these are no mean institutions in Ghana. And so he cannot accuse people of hypocrisy just because they hold a different viewpoint from he had intended.

Prior to last Sunday’s withdrawal of the contentious referendum in a national broadcast on Sunday night, President Nana Akufo-Addo said he had believed that a meeting he had with the three former presidents -John Rawlings, John Kufuor and John Mahama- on April 18, 2017, at which the referendum was discussed, ended with a general agreement that political parties be allowed to participate in local assembly elections.

“I came away from that meeting with the view that there was consensus amongst us that the time had come for political parties to participate openly in district assembly elections and local governance,” the President indicated.

But Mr Mahama told JoyNews’ Kwesi Parker-Wilson in an exclusive interview after a meeting with the Islamic Federation Council in Accra yesterday, that indeed the meeting took place to look at three key issues.

He said, they discussed the welfare of former presidents, the creation of new regions, as well as the election of Metropolitan, Municipal and District Chief Executives (MMDCEs).

However, there was no agreement that political parties should be allowed to participate in the election of MMDCEs, he revealed.

Mr Mahama, said he maintained his position that the MMDCEs be elected as recommended by the Prof. Albert Committee.

The committee proposed that the president nominates five people for the position of MMDCE for a particular assembly to the Public Services Commission, where the list will further be pruned to three before they are presented to the public for election.

The referendum had sought to amend Article 243(1) and Article 55(3) of the 1992 Constitution to enable MMDCEs and unit committee members to be elected along political party lines.

However, the question of whether to allow political party participation at the local government level dominated major discussions with the leading opposition party, National Democratic Congress (NDC) campaigning for a ‘No Vote’.

President Akufo-Addo, threw a jab at the NDC describing them as “hypocrites” who, after participating in stakeholder engagements and giving their consent for the exercise to be held, only made a last-minute U-turn to campaign for a ‘No vote’.

“In addition, the impression had been created that the referendum was about the election of MMDCEs which it isn’t. The election MMDCEs is in the bosom of Parliament”.

“If our parliamentarians agree that DCEs should be elected they can be elected. It’s just that we don’t want political parties bringing the polarisation that we have at the national level into our local government system,” he stated.