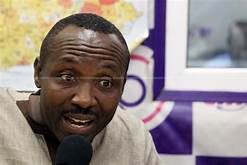 The General Secretary of the New Patriotic Party (NPP), John Boadu, has taken a dig at the opposition National Democratic Congress (NDC) for seeking to berate and downplay efforts by President Akufo-Addo to tackle corruption in the country.

The NPP chief scribe maintains  that the current administration under president Akufo-Addo has done far better in the fight against corruption than the NDC did when it was in power.

Mr. Boadu’s comments come on the back of a press conference organized by the NDC and addressed by its General Secretary, Johnson Asiedu Nketiah during which they lampooned the president for rating himself himself and his government high in the fight against corruption at the ongoing Ghana Bar Conference.

Speaking in an interview on Accra based Citi Fm, Mr. Boadu opined that President Akufo-Addo is taking the bull by the horn in his approach to dealing with corruption in the country, a stance he noted was lacking during the John Mahama and NDC regime.

“He [President Akufo-Addo] is pointing out the efforts that he is making even when it is allegations that are sometimes based on nothing. He even goes to the extent of referring those people to institutions that are responsible for investigating those matters.” he noted.

The NDC through its General Secretary has called on the generality of the Ghanaian people to reject president Akufo-Addo and the NPP in the 2020 elections based on what they say is government’s lack of courage to fight corruption.

Mr. Asiedu Nketiah further claimed that the government was presiding over the greatest heist in Ghana’s history.

“Only a strong and unambiguous signal to president Akufo-Addo and his government can reverse the current drift of the country into an abyss of corruption and total collapse. we have the power to cause a change in the history of our country by refusing to surrender the public purse to a marauding gang of looters who present the facade of incorruptibility.”