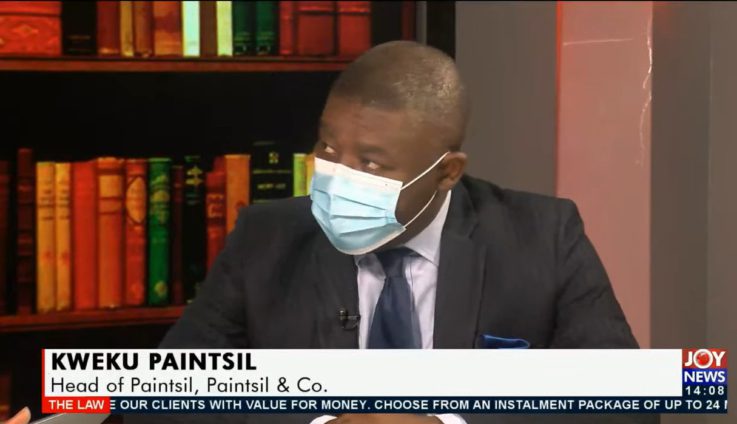 Private Legal Practitioner, Kweku Paintsil, has advised Ghanaians against resisting arrest by the police whether they have done anything wrong or not.

According to him, once the police informs a person about a reason for which they are effecting an arrest, no one has the right to resist.

Speaking on The Law, on Sunday, he stated that, “the point of the matter is that a determination has to be made by the court of law. In other words, the police on suspicion that somebody is committing a crime, or somebody is in the act of committing a crime itself, has got the power to arrest and when they arrest they are entitled to do so after they have informed you of the reason for effecting the arrest.”

Mr. Paintsil explained that if the person being arrested has a peculiar right, privilege or want to deny allegations that constitutes the offence, they can only inform the court of law after the police have arraigned them.

“The arrest is unlawful if the police have failed to do what the law requires them to do, which is to tell you in a language you understand, the reason for effecting your arrest, that is the only circumstance (under which you can resist arrest),” he added.

It would be recalled that the MP for Madina, Mr. Sosu declined to avail himself for questioning at the Police station when he was invited for being involved in a protest against bad roads by his constituents on Monday, October 25, 2021. The demonstration turned chaotic when protestors blocked a section of the road and set tyres ablaze.

The legislator argued that he had a parliamentary call to attend and could not be apprehended until the Speaker of Parliament is contacted.

Mr Sosu later filed a complaint of contempt of Parliament against the two police officers to the Speaker of Parliament.

However, Mr Paintsil believes that the MP’s reliance on his parliamentary privilege to resist arrest is wrong.

He explained that from what Mr. Sosu has said on the matter so far, he (MP) has sufficient information on why that action was necessary.

The Legal Practitioner added that, “what I see is that he has started to more or less raise his defence to the action, the defence includes the privilege. Because, if you come before a court of law and the police have charged you and it is your case that, that particular activity that you were involved in, is covered by parliamentary privilege, it is to the judge that you say that.”

Mr. Paintsil contended that if the police, during their investigations are sufficiently convinced that the person is not guilty, then they are not entitled to prosecute.

He added that in such cases, “the law also provides the remedy for malicious prosecution.”

Meanwhile, Parliament has stated its inability to release MP for Madina, Francis-Xavier Sosu to assist in investigations as requested by the Criminal Investigation Division of the Ghana Police Service.

In a letter dated October 28, addressed to the Deputy-Director General of Criminal Investigation Division, F.K. Agyei, Parliament indicated that due to limitations of Articles 117 and 118 of the 1992 Constitution, Mr Sosu cannot be released.

The Police Service has been urged by Parliament to conduct its investigations mindful of the provisions of articles 117, 118 and 112.

Article 117, provides for immunity from service of process and arrest, “Civil or criminal process coming from any court or place out of Parliament shall not be served on, or executed in relation to, the Speaker or a member or the Clerk to Parliament while he is on his way to, attending at or returning from, any proceedings of Parliament.”

Article 118 which also guarantees immunity from Witness Summons states; “neither the Speaker, nor a member of, nor the Clerk to, Parliament shall be compelled, while attending Parliament to appear as a witness in any court or place out of Parliament.”