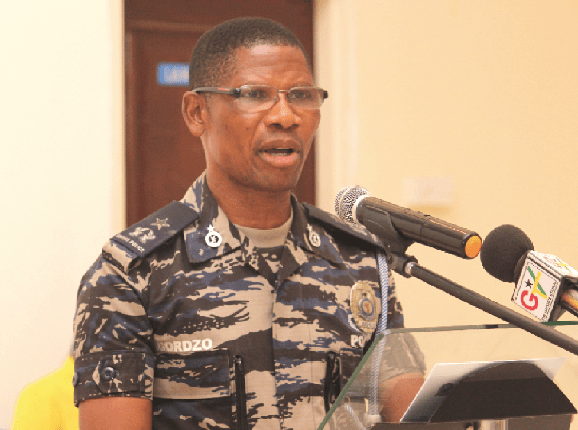 Assistant Commissioner of Police (ACP) Dr. Benjamin Agordzor has spoken to his beloved wife from detention saying despite the ill and unjust treatment he is suffering in the hands of state security, he has not lost faith that God is still in control.

He spoke briefly to his wife after she waited for more than 11 hours to see him after BNI officials denied her and his lawyer access to him, MyNewsGh.com learnt.

In ACP Agordzor’s estimation, the entire process “is a kind of intimidation” as other police persons invited over the same whatsapp messages have been allowed to go.

“… … That is the way I look at it. Because I don’t see how they can stand on WhatsApp messages and start persecuting somebody. You keep the person in custody [but] all who were invited concerning those WhatsApp messages have all been discharged.” he lamented.

After being allowed to see him following persistent pressure, Mrs Agordzor said she saw her husband and she is trusting that the truth will come out and he will be home soon.

“I have seen him, I have spoken to him. And I think it is a better way of relieving myself than waiting. We are trusting that the truth will come out and he will be released anytime soon,” she stated. “He said God is in control so I should just be calm”, she added.

ACP Agordzor has been an outspoken advocate of Police reform, declaring in public lectures that successive police regimes have become ‘stooges’ and ‘errand boys’ for politicians so they lack the independence to fight crime. Agordzor has also called for independence of tenure for the IGP and other investigative body heads in order for full law and order to work in Ghana.

His lawyer believes these are the reasons for his “persecution”.

“Essentially, they are holding him over whatsApp messages. The fact that he was giving advice on lawful means of holding demonstration and donating towards a philanthropic course. They also say he said conditions for Arab spring are rife in Ghana, this something that most commentators on various issues have one point said before,” he told Francis Abban on the Morning Starr Tuesday.

He added: ” My client sees the case as a witch-hunt and persecution over his outspokenness. The way he spoke out at the IDEG event about how the police is not independent and the political interference in the service. This is not something he should be detained. He sees this case as a witch hunt, as persecution. At the IDEG event he had said the police is not independent.” His lawyer added.

Dr Agordzor, according to his lawyer, was accused of assisting the alleged leader of the coup plotters, Dr Frederick Yao Mac-Palm, through messages he sent on instant messaging platform, WhatsApp.

Mr Kpebu said his client was confronted with the messages in which he had allegedly advised members of the group who were planning a demonstration to seek police permit.

Mr. Agordzor is currently on detention at the BNI.