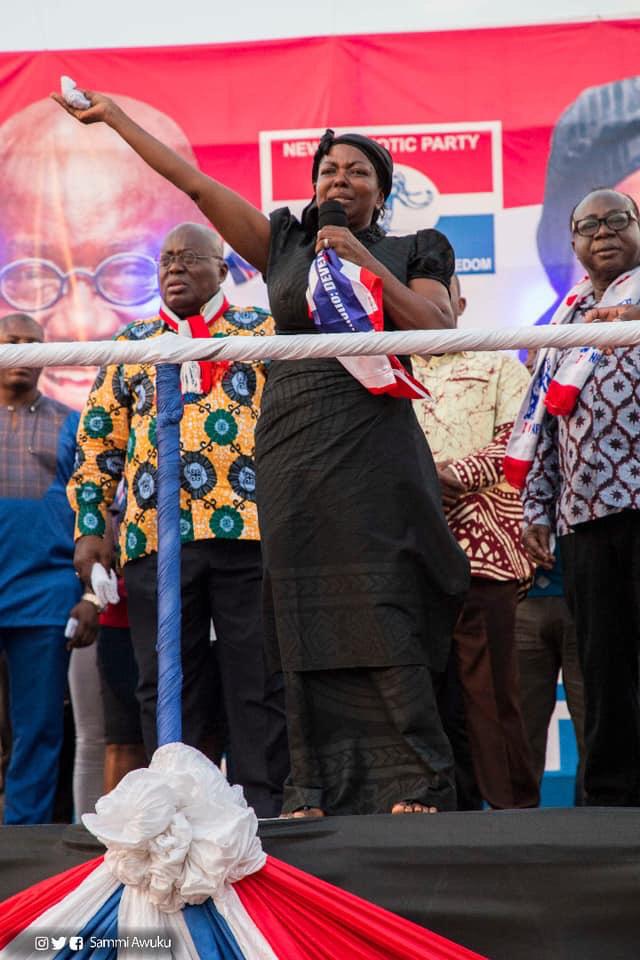 The ruling New Patriotic Party (NPP) Parliamentary Candidate for the Ayawaso West Wuogon Constituency, Lydia Seyram Alhassan has promised to work hard to justify the trust and confidence of the constituents, if she emerges victorious in the 31st January by-election.

‘’I thank you for the honour done me, that I should lead you in the constituency. I have not taken it for granted. By the grace of God I will not disappoint you. I will work hard to bring respect and dignity to you all’’ she said at the party’s final rally in the constituency on Tuesday, January 29, 2019.

Mama Lydia as the NPP Parliamentary candidate is popularly known told the gathering which included the president, the vice president and chief of staff among top party and government functionaries that she was coming on board with what she calls the (SSSWY) which stands for Security, Sanitation, Scholarship scheme, Women and Children empowerment as well as Youth entrepreneurship.

According her, she will build and add on to what has already been done by the late Member of Parliament for the Constituency, Emmanuel Kyeremanteng Agyarko who passed on at a health facility in the United States of America where he was undergoing treatment for an ailment.

‘’I will continue with the good works and legacy of our late father and MP Agyarko. I will continue from where he left off. I will endeavor to ensure the completion of the hospital in Mempeasem by the grace of God. There are road projects that are ongoing and I hear our opponents say it is because of the by-election, but as we all know, the Dzorwulu roads, have been done and they were not done during a by-election, is that not so? The underpass that you used to wait for 30 minutes before one car passes by, before you can commute to other places and which the late MP negotiated and got it done, was it a by-election?’’ she quizzed.