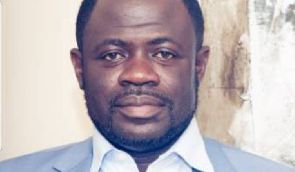 The ruling New Patriotic Party (NPP) chairman for the New Juaben North Constituency in the Eastern Region, Kwadwo Boateng-Agyemang has vowed to lead a demonstration against President Nana Addo Dankwa Akufo-Addo should he pay a dime to any customer of distressed gold trading firm Menzgold.

According to him, the company’s customers themselves brought the crisis upon themselves when they decided to fall for the lofty and high interest rates that were being offered by the company, adding that they became sales and advertising ambassadors for Menzgold when they started enjoying the benefits.

‘’In trading principles the reason why you couldn’t hold him responsible for security is that at a particular point in time there was no way you could identify any malfeasance or anything that connected criminal activities. People have sat down for things to degenerate to this level and they are trying to blame government for it? How is that possible?’’ he quizzed.