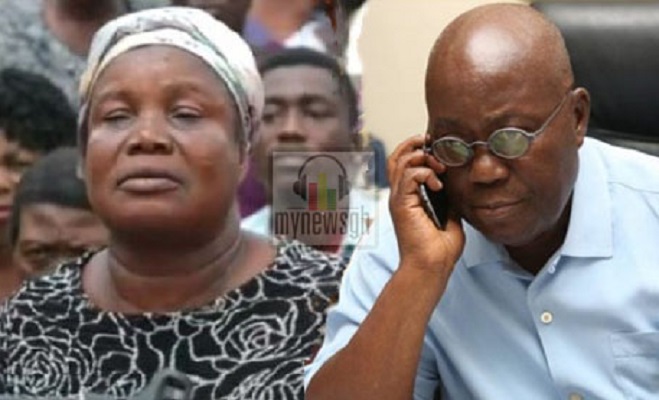 Comfort Arhin, the mother of Ruthlove Quayson one of the dead Takoradi girls has shown remorse over the snub of President Nana Addo Dankwa Akufo-Addo.

The woman after a DNA results proved her daughter was dead, declined speaking with the President when he called through his spokesperson to commiserate with her.

The deceased’s mother went further to justify her action on Accra-based Kasapa Fm saying “Why now? The issue happened long ago, and all this while he didn’t feel the need to talk to us. He was even in the region quite recently, went to Axim but he failed to stop by and pay us a visit”
She added: “I have not touched anything from the government, not even the token in an envelope they brought to us earlier.”

But beating a sudden retreat on her earlier stance, she claimed her snub of the President was not deliberate but as a result of noise from where she was.

“Someone called me and said the he is the spokesperson of the President but the place was noisy and I could not hear what he was saying. I asked that he calls back later in view of the fact all he was saying was drowned by the noise”, she explained.

According to her, she did not snub the President and therefore apologized profusely for her action which has been described by many as disrespectful.

“I am sorry if I offended the president”, she apologized.

The girls — Priscilla Blessing Bentum, 21, Priscilla Mantebea Koranchie, 18; Ruth Love Quayson 18, and Ruth Abeka – were victims of a kidnapping and murdering syndicate in the Takoradi area, police have said.

The Acting Inspector of General of Police, James Oppong Boanuh, said at a press conference Monday that the results of the DNA test on remains retrieved in Takoradi have been relayed to the families along with condolences.