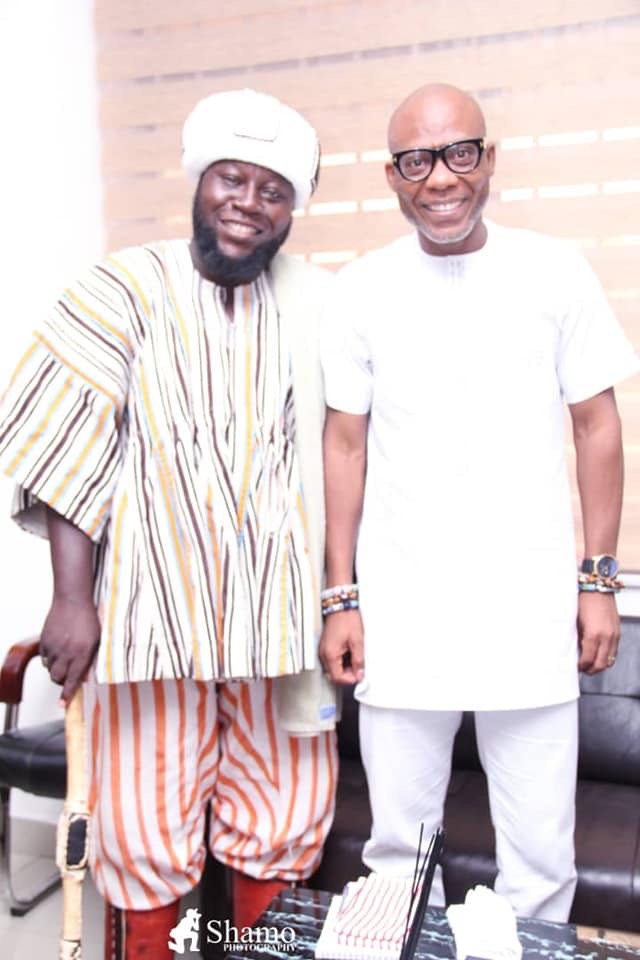 The Mayor of Tamale, Iddrisu Musah Superior is yet to come to terms with the passing of one of his closest allies, the entertainment chief of Tamale, Hafiz Mohammed who passed on yesterday, Saturday November 17 2018 at a health facility in Tamale.

The Mayor describes the late young businessman and traditional leader as one of his closest, loyal and protective friends and co-worker in the Tamale project.

‘’He was a kind of friend that is family. My mum calls him her “honest son”. My brothers and sisters will speak to him first anytime they needed to speak to me about their needs. He virtually became part of us and we loved him.’’  He wrote in a long tribute to the late Hafiz Mohammed.

See below, his write on his relationship with the deceased.

The Mayor describes the late young businessman and traditional leader as one of his closest, loyal and protective friends and co-worjer in the Tamale project.

Dema Naa; a productive Citizen of my city gone too soon. I feel empty, shattered and truamatized by the loss of this invaluable soul.

This afternoon, I received a WhatsApp message from the Tamale Central NPP Youth Organiser, Imoro Bugli Yakubu aka Jack Moro @ 1347 GMT, informing me about the sudden, unimaginable and shocking death of the Tamale Entertainment Chief, Hafiz Mohammed (Dema Naa). I doubled checked and it was confirmed to me by a family member that, I have truly lost one of my CLOSEST, LOYAL and PROTECTIVE friend and co-worker in the Tamale Project. I was and still DEVASTATED by this HUGE LOSS. It is a personal loss. Dema Naa was not just any friend. He was a kind of friend that is family. My mum calls him her “honest son”. My brothers and sisters will speak to him first anytime they needed to speak to me about their needs. He virtually became part of us and we loved him.

I met Dema Naa for the first time, when I was nominated and confirmed as the Tamale Metropolitan Chief Executive in March 2017. He was introduced to me by an enthusiastic Tamale watcher as a development activist. Since then, Hafiz has demonstrated greater commitment to the development of Tamale in all aspects of the Tamale Project which I lead and supervise. He was focused and passionate about enabling our communities to become better places for young people. He was a transformational worker and change agent. As we work in the most difficult circumstances, Dema never gave up. He had a gift of innovative thinking, a visionary spirit, tolerant and tenaciously patient.

In addition to Dema Naa’s devotion to his role as the Commander of the TaMA taskforce and his social engagements to the improvement of vulnerable lives, he has always found time to organise or participate in the organisation of various entertainment programmes in the Metropolis. He had significantly supported most of the Tamale based artists in various forms kindly.

This beautiful soul, inside and out was a wonderful friend supporting me personally in the last 15 months to deliver my role as the Mayor. One of his beliefs was the importance of being authentic with people, saying what he believed needed to be to said to address a challenge. I always admired how he never judged or forced his opinions on anyone. He offered valuable and truthful interventions I will surely miss. He was intelligent, open, transparent and eloquent discussant. He denoted exactness in most deliberations.

“And We will surely test you with something of fear and hunger and loss of wealth and lives but give good tidings to the patient, who, when in distress strikes them and say, “indeed, we belong to Allah, and indeed to Him we will return”. Those are the ones upon whom are blessings from their Lord and mercy and it is those who are truly guided”.

I hope he will forgive me for the many times I brushed him off when he talked about death.

My heart goes out to the unwearied and alluring wife of the late Dema Naa, Sanatu Tia Sulemana and precocious children and the entire family. I offer you my thoughts, prayers and well wishes during this dark time of your lives.

May his soul Rest In Peace and granted Jannat-ul-firdos.

I have cut short my official engagements in Accra and will return to Tamale tomorrow, to fully participate in the preparations for the funeral and the funeral itself.