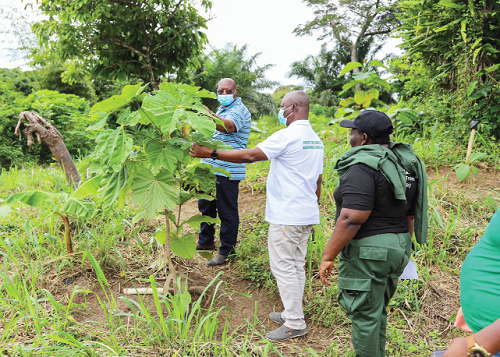 About 99 per cent of the trees planted in forest zones during the maiden Green Ghana project on June 11, this year are surviving.

According to the Ministry of Lands and Natural Resources, its initial assessment of the performance of the trees in the forest zones had shown that almost all the trees were doing well.

It had, subsequently, rolled out an initiative to take stock of the over 7.6 million trees that were planted on the Green Ghana Day.

Dubbed: ‘Visit your tree’, the initiative will see all the high-profile personalities who took part in and planted trees on the Green Ghana Day that was marked on June 11, this year visit their trees to ascertain how they were faring.

Among the personalities are President Nana Addo Dankwa Akufo-Addo, the Vice-President, Dr Mahamudu Bawumia; the Speaker of Parliament, Mr Alban S.K Bagbin; the Chief Justice, Justice Kwasi Anin Yeboah, and all the heads of religious bodies.

The Deputy Minister of Lands and Natural Resources in charge of Forestry, Mr Benito Owusu-Bio, who disclosed this to the Daily Graphic last Friday, said the Asantehene, Otumfuo Osei Tutu, members of the Council of State and the National House of Chiefs and ministers of state would participate in the exercise.

“When we had the maiden Green Ghana Day on June 11, this year, these high-profile personalities led the way by planting trees. December 11, this year, will be exactly six months since we planted the trees. As part of stocktaking, we are rolling out the ‘visit your tree’ initiative, so that they can visit the trees they planted and share pictures of the trees for the public to know how they are doing,” he said.

Mr Owusu-Bio said the ‘visit your tree’ initiative was being rolled out to sustain the interest of members of the public ahead of the launch of the 2022 Green Ghana Day scheduled for December 11.

He indicated that all metropolitan, municipal and district assemblies (MMDAs), school authorities and individuals who planted trees were also required to visit the trees they planted to ascertain their progress.

While addressing the recent United Nations Climate Change Conference (COP 26), the Minister of Lands and Natural Resources, Mr Samuel Abu Jinapor, had announced that Ghana would plant 20 million trees in 2022 as part of measures to tackle climate change.

Mr Owusu-Bio said as a show of commitment for that project, the President had asked the Minister of Finance to allocate funds to support the planting of the 20 million trees.

“During the maiden Green Ghana project, the Lands and Natural Resources Ministry had to solicit funds from corporate bodies in the form of donations to carry out the tree planting. Now the President and the Cabinet are fully committed to the project and will commit resources for it in the budget that will be presented to Parliament in a few days. We need the buy-in of all Ghanaians to plant the 20 million trees,” he said.

The deputy minister added that the target was to supply more fruit trees such as citrus, coconut and mango to Accra and other urban areas to encourage people to plant more trees.

The acting Technical Director in charge of Forestry at the Lands and Natural Resources Ministry, Mr Joseph Osiakwan, called on all stakeholders to support the government’s effort to tackle climate change through tree planting.

He also urged members of the public to desist from cutting down trees and depleting the greenery in the environment, since that practice had dire consequences on human survival.

In his 2021 State of the Nation Address (SONA) last March, President Akufo-Addo had announced the Green Ghana initiative to mobilise Ghanaians for an aggressive nationwide tree-planting exercise.

Subsequently, Mr Jinapor, on March 23, this year, had launched the greening project as part of activities to mark this year’s International Day of Forests, which fell on March 21.

The government’s initial target of planting five million trees under the project ballooned to about 10 million, following the expression of interest in the initiative by a number of organisations.

The Chairman of the 60-member Green Ghana Project Planning Committee, Mr Owusu-Bio, had told the Daily Graphic that the 10 million-tree target was in sight after a collaboration with the Ghana Education Service (GES) aimed at getting five million students across the country to plant a tree each under the One-student, One-tree campaign.

Additionally, a number of religious organisations, including the Catholic Church, the Methodist Church Ghana, the Church of Pentecost and the Presbyterian Church of Ghana, all mobilised their members to plant one million trees each.

The initiatives of the churches alone translated into 3.9 million trees.

Also, the Chief Imam encouraged Muslims to take part in the tree planting project by planting trees around mosques across the country.